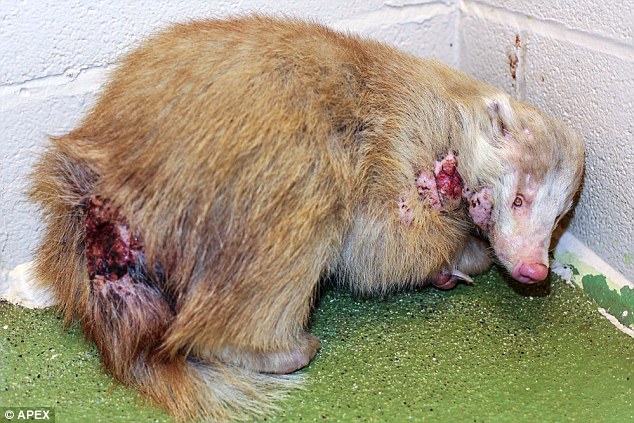 Somerset(UK): An all-white albino badger was attacked by a gang of normal colored badgers and wounded him badly.
He is said to be recovering after the jealous rivals chewed his testicles and left him to die in a toilet.
It is said that the gang of normal-colored male badgers are fearing “Romeo” Alberto as they can catch the eyes of all the female badgers with their sleek stripe less coat.
This is the normal reason that found behind such attacks.
The rivals attacked the cute white badger and left him with gaping bite marks on his neck and around his groin, hoping to put an end to his hopes of scoring with the ladies.
The Alberto was being nursed at the RSPCA’s West Hatch wildlife hospital in Taunton, Somerset.
Staff of RSPCA said that he was found, badly beaten up, in an outdoor toilet in Beaminster, Dorset, and being taken to the hospital for treatment.
He has been recovering from his wounds and expected to return to the wild once he regained its full strength and ready to rush back into action with the females.
RSPCA wildlife center supervisor Paul Oaten said that the Albino badgers were fairly rare and they were being attacked by the latter species only once in a blue moon.
This poor badger was brought to the hospital with bite wounds on his neck and buttocks, but other than that he is in good condition.
He has been seen by the vet and had the wounds cleaned up and will be undergoing a course of antibiotics.
According to doctors a lot of such badgers with these kind of injuries are found throughout during February and March as they are most territorial during this time-frame.
As the females used to give birth to offspring in February, they are ready to mate again straight away, so males are competing for females.

Video on a albino badger attacked by another