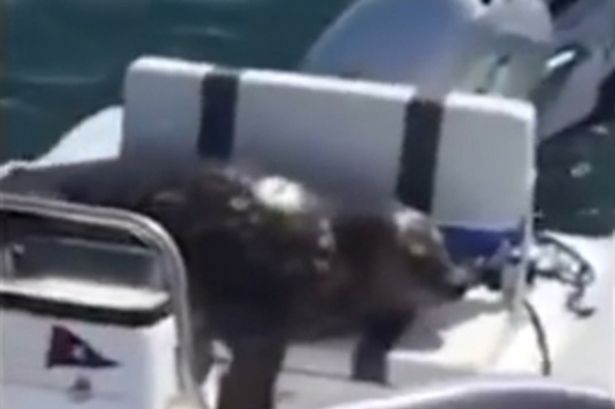 Canada: A terrified seal was in danger when he happened to be in the midst of circling killer whales.
However, the seal made a cunning escape, by diving on to a holidaying family’s small boat.
But the predators who were annoyed by its escape were not ready to give up their attempt to capture the seal.
With out knowing the whales, the seal had taken refuge on the small boat which was being pulled along by the unknown family’s bigger boat.
The seal had pulled itself on to the front seat and was laying happily as the disappointed whale would have hunted for it for more than 20 minutes.
The seal which was succeeded to achieve a clever escape, made his way back into the water after the whales were gone.
The Killer Whales which are well known for their togetherness to hunt, catch and kill their prey, are also popular in their ability to hunt down seals.
According to Scientists, Killer Whales are often found to have a 75 per cent success rate in catching their victim.
They have also discovered killer whales, which used to grow around 28 ft in length with weight more than six tonnes.
They are famous for their cooperation in capturing and sharing their underwater prey.

Video on the seal which escaped from killer whales