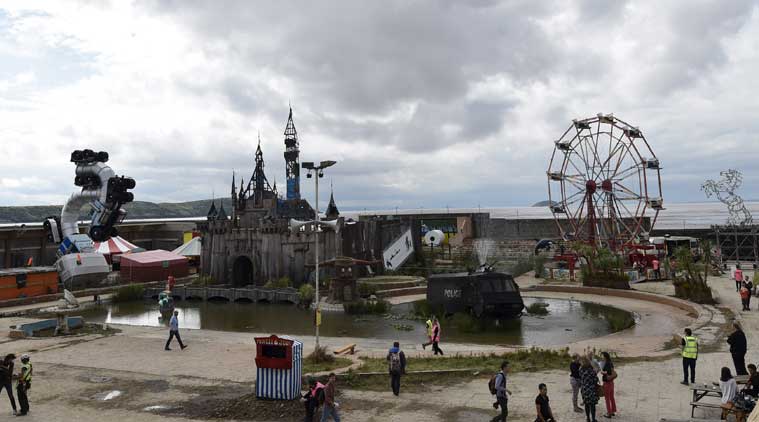 England: British artist Banksy’s derelict theme park ‘Dismaland’ is now opened for the public.
This will be a humorous theme park in southwest England which has been arranged skillfully to be the parody of an anti-theme park.
It is assumed that the entertainment center could be an alternative to the sugar-coated tediousness of the average family day out.
Dismaland offers a review of the Disney theme park, featuring hair-raising visions of a post-coach-crash Cinderella, a performing killer whale jumping and an oil-caliphate-themed mini golf course.
Other attractions in the park include a Jimmy-Savile-themed Punch and Judy show, a fire pit for burning Jeffrey Archer novels and a boat pond crammed with refugees.
Many of the exhibits arranged in the Dismaland require audience participation to get their total thrill.
Inside the walls of the creaky seaside swimming resort, a grimy looking Disney-like castle and a giant rainbow-colored pinwheel enmeshed in plastic are something big to be viewed.
A number of musicians, including Kate Tempest and members of Pussy Riot, will perform their best during the five-week run og the Dismaland.
The activities being performed here have all the hallmark goodness of traditional cultural events.
However, suspicion as well as anticipation surrounding the unusual activity center are still remaining.

Video on the specialties of Dismaland theme park