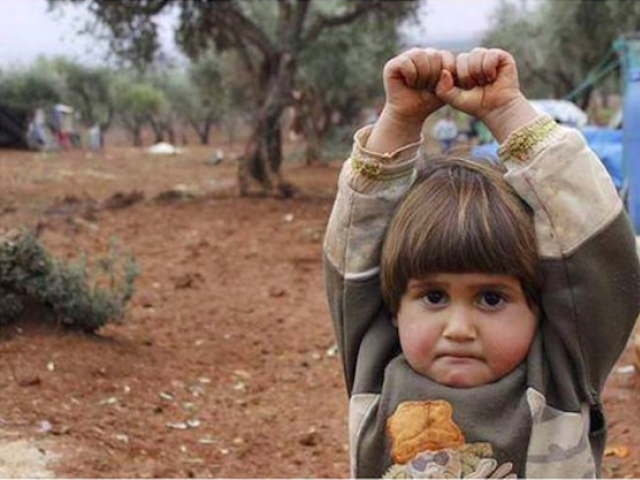 Damascus: A four-year-old Syrian girl was seen showing the symbol of surrender to a photographer when he was about to take her photograph. The heart breaking moment was at Atmen refugee camp when the innocent girl mistook the man’s camera as a gun.
The Atmen refugee camp locates on Syria’s border with Turkey last December, the image shows The young girl frozen in fear was kept her arms raised while her lips tightly pursed.
The child has been identified as Adi Hudea, whose father was died in the 2012 Hama massacre. Currently she has been living with her traumatized mother and three siblings at Camp Atmen ever since.
This heartbreaking image was taken by Turkish photojournalist Osman Sagirli which he shared on social media later.
Turkish media researching the origins of the photograph later suggested that the the image of a four-year-old was a boy and revealed that he was a resident of the Atmen refugee camp in Syria.
The five-year-old Syrian Civil War has so far claimed the life of more than 220,000 lives, including an estimated 10,000 children.
Millions of people are reported to have been displaced followed by the conflict. Among the estimated 12 million such people, about five million are children. They are considered to be still in desperate condition and in need of humanitarian assistance.

Video on the Syrian girl who surrenders to a Photographer