Legend behind the authorization of Thazhamon priests for Sabarimala Temple 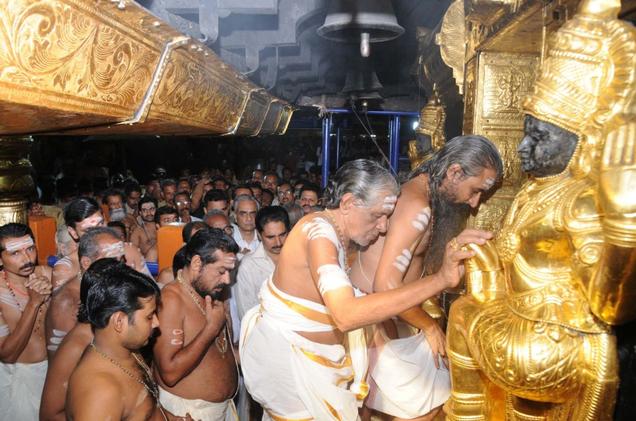 As per legend, it was Sage Parasuram who created the God’s own land Kerala from ocean. After this venture his next intention was to construct temples for Gods and Goddesses at various locations in the piece of land. Thus he consecrated Siva- Vishnu idols in midlands, idols of Goddesses in coastal land and idols of Lord Sastha at various mountain terrains in the land. For performing rituals in these temples, he decided to bring two Brahmin brothers from Andhra Pradesh who were ascetical and well versed in sacraments. When they reached near River Krishna Parasuram wanted to test the abilities of these two Brahmin brothers. It is said that Sage Parasuram asked the brothers to cross over the watercourse after creating a giant flood in the river. One Brahmin brother crossed the river with the support of a leaf after transferring his divine powers on it. Since he crossed over the water, he got the name Tharanam. The meaning of this Sanskrit word is ‘to cross’ and his descendants came to be known as Tharanallur. The latter Brahmin brother partitioned the flowing water in to two portions and crossed through the passage developed. He got the name Thazhamon which means bottom sand. Thus he and his successors earned the name Thazhamon having title name ‘Khantor’. Thazhamon priests were authorised to perform rituals in Sastha temples while priests belong to Tharanallur family were assigned charges of other temples especially Goddesses temples belong north Kerala.
As far as Gods and Goddesses are concerned, priests are similar to own fathers since they bring life and splendor to the respective idols by means of systematic rituals. This is the reason why kings belong to Pandalam dynasty and priests belong to Thazhamon family are not required to carry the two small pouches as sacred bifurcated head loads while getting on the godly 18 steps in Sabarimala. There are stone-inscriptions saying that priest Khantararu Prabhakararu had made an idol consecration at Sabarimala years back. As per the available documents Khantararu Shankararu had also made an idol consecration in Sabarimala. After the rampage of fire, it was Khantararu Shankararu who consecrated the existing idol in Sabarimala. This year(2014) the authorized priest at the Sabarimala temple is Brahmasree Khantararu Rajeevaru.