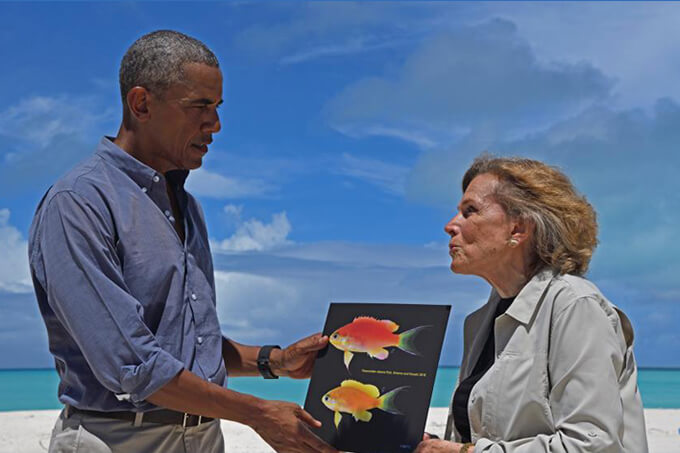 The scientists are naming a newly discovered fish after President Barack Obama partly as an honour to his decision last month to form a new protected area, off the Hawaiian coast.

National Geographic recently reported that the maroon and gold creature, which was found 300 feet deep in the waters off Kure Atoll, is the only known fish to exist within Papahānaumokuākea, which is an extension of coral reefs and seamounts, home to greater than 7,000 species.

A formal definition of the species isn’t expected to be announced until later this year. So, one who is looking for the fish’s official name, however, is likely to remain hooked.
Recently, Obama established the biggest preserved marine sanctuary in the world when he more than quadrupled the area of the Papahānaumokuākea Marine National Monument to protect marine life habitats, reefs and other resources. The expansion will combine 442,781 square miles to the monument, thus making it a total of 582,578 square miles.
The dorsal fin coloration of the male is a red circular spot ringed with blue which scientists said prodded them of Obama’s campaign logo.

Richard Pyle, a marine biologist, said that it’s very implicative of Obama’s campaign logo. He also mentions that it is relevant that a fish they were thinking about naming after Obama, just to honour his decision for expanding the national monument, appears to have a feature that matches it to the President.
The species was found this past June during a study trip to Kure, which is the world’s northernmost atoll.

However, this is not the very first time that Obama has had a fish named after him.
Experts named an aqua, and orange spotted freshwater darter discovered in the Tennessee River Etheostoma ‘Obama’ in 2012. At the time, scientists called others of the more than 200 species of darters found after other presidents.