Pakistan hunts stray dogs in the city of Karachi 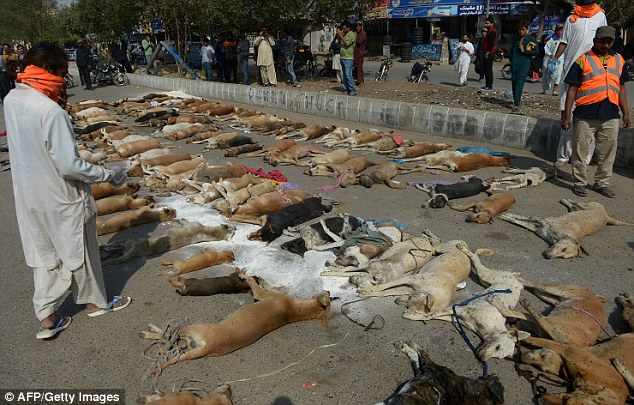 Karachi: The increasing number of stray dogs in Karachi prompted the city officials to destroy them by poisoning. Under the grounds of increased dog disturbances, they were decided to launch a campaign for their complete destruction.
A similar campaign had conducted in Lahore too, where stray dogs were killed in order to keep citizens safe from dog biting incidents.
Pakistan is one of several countries in the world to eliminate rabies permanently.
If a rabies prone dog bites people or other animals, they get infected by the rabies germs which could be deadly.
The disease affects the central nervous system of most warm-blooded animals.
The city officials who were concerned about the number of stray dogs in Karachi, were prompted to take an immediate action.
According to the World Health Organization a few activities are underway to eliminate rabies infection in Pakistan.
This means that people of Pakistan are at risk from rabid dogs.
According to them, killing stray dogs will not eliminate the threat of rabies permanently.
Moreover, there is no evidence to suggest that the destruction of stray dogs would reduce the spread of the disease.
The Pakistani city began a mass removal of the stray dogs after authorities became alarmed of their increasing numbers.
Municipal workers were seen laying out the bodies of the dead animals on the road after they captured and killed them.
The dead bodies of dogs were later dumped in to a vast rubbish pile.
If the number of stray dogs are increased, they breed among themselves, giving rise to a population of animals that have never been properly domesticated.
Last year, officials in Russia had come under fire following an information that the city of Sochi had hired by a private company to kill as many stray dogs as possible before the Winter Olympics.

Video on the destruction of stray dogs in Pakistan