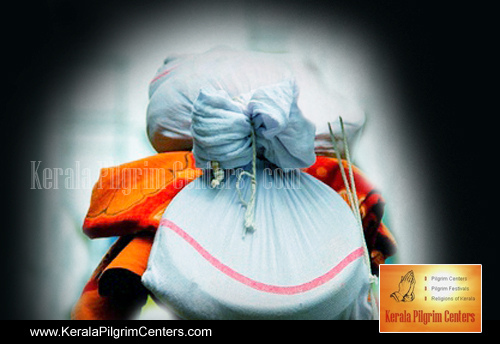 The Ayyappa devotees, who want to visit Sabarimala Temple by moving up along the 18 sacred steps located at the temple entrance, have to carry the ‘Irumudi Kettu’. This is a specially designed bag with two compartments. The formality of filling the compartments of this bag is called Kettunira or Palli Kettu. The front portion of the bag is meant for keeping articles required for rituals and other offerings to be made for the deities at Sabarimala. This part of the twin-baggage is to represent spirituality.
The other compartment is meant for the personal belongings of the devotees to be used during their pilgrimage. Thus, this part of the twin-baggage is to represent materialism. This is to point out that the materialism is to be backed up by the spirituality. That is why the traditional customs and formalities are designed with materialism which has been backing up by spirituality. Thus, each and every Sabarimala devotees carry both spirituality and materialism on their heads while climbing up the 18 holy steps which lead to the temple premise.
In front of the temple, first they can view the Godly word ‘Tatwamasi’ before praying for the blessings of Ayyappa Swami. Thus they can experience the unique awakening of Godly splendor existing inside themselves. It is also believed that the front portion of the Irumudi represents good acts of the devotees while the rear one, their sins.
Nowadays both the compartments of the Irumudi kettu are seen filled with articles meant for offerings. Earlier, when the journey used to be for six or seven days, devotees were carried provisions in the second compartment. Once the Irumudi Kettu is filled, it symbolically represents the deity and hence, need to be held with reverence. It is said that it should not be kept as it is on the ground whenever required. It is to be placed on a small thick sheet or woolen carpet by chanting the incantations of Swami Ayyappa. If the journey is for more than one day, rituals are to be performed on the Irumudi Kettu both in the morning and evening. While walking, the Irumudi is to be placed on head in such a way to get it balanced properly. This holy baggage is not only the representation of devotion and belief but also the spirituality which is seen in association with the materialistic or worldliness nature of human beings. This fact is very much similar to the walking of human beings. For walking properly man requires both his legs. With only one leg he cannot go forward easily. Likewise, a devotee requires the support of both spiritualism as well as materialism to bring his devotion on proper path.