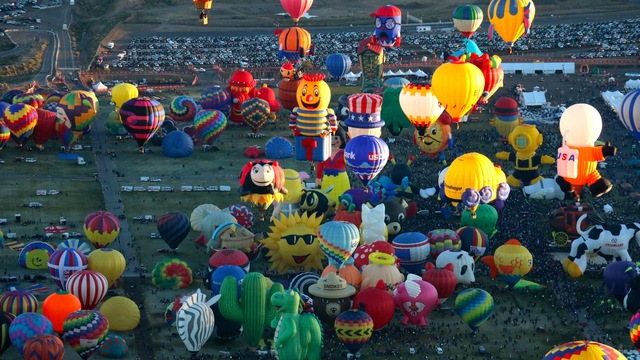 44th annual Albuquerque International Balloon Fiesta is celebrated with gaiety and enthusiasm.
Tens of thousands of spectators were gathered at the launch field during the first mass rising of the 44th annual Albuquerque International Balloon Fiesta.
The nine-day event was kicked off in the early morning itself.
More than 500 balloons belong to dozens of states and nearly 20 different countries were registered to participate for the event this year.
Among them, certain funny character balloons, such as one portraying the head of “Star Wars” villain Darth Vader, which inevitably floated across from a Yoda balloon were grabbed the attention of viewers.
Other notable varieties were two bees kissing and a flying pig with sunglasses.
One of the big attraction of the balloon fiesta is the ability of spectators to roam the 72-acre balloon park in the city to watch the early morning mass ascensions.
A lot of favorable factors make Albuquerque the perfect place to conduct the fiesta. Clear skies, pleasant cool mornings, wind patterns at various elevations etc. help keep the balloons to properly fly over the city.