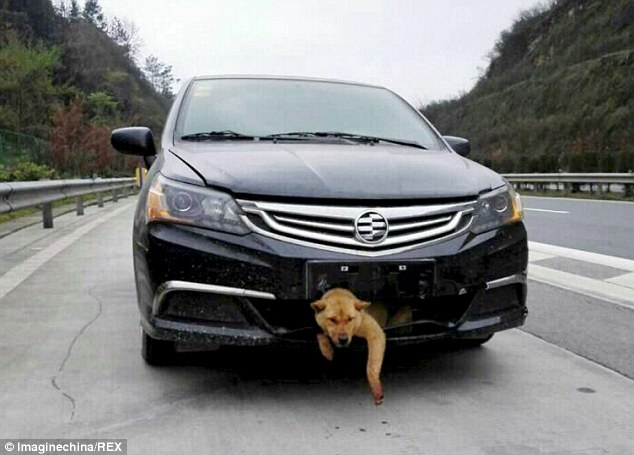 Fenghuang County (China): A stray dog was hit by a car when it ran across the vehicle.
The forceful hit by the car made the animal stuck all along the 250 mile journey after the driver felt it was too difficult to remove him.
The puppy which was hit by the car and got stuck inside its front bumper for a 250 mile journey was found survived miraculously, while the driver felt it was too difficult to remove the dog.
The dog got impacted inside the car’s bumper after it leaped out from bushes into the road, giving the driver no chance to apply break of the vehicle. This funny as well as marvelous incident was at Fenghuang County in central China’s Hunan Province.
Driver Mr Zhang thought that the dog was dead as he heard a sound coming from the front of his car when he viewed the pooch trapped in the bumper of the car.
According to him he was driving pretty quickly at the time when the dog was hit.
He thought that it would have either died or run away, so he didn’t get out of the car to check.
But later, he could hear barking from under the car.
There was some distance between the dog and the water tank of the car while its body was held tightly by the bumper.
But he didn’t dare to free it by himself. He thought it should be safe there, so he drove it all the way back to Loudi.
The dog which was amazingly found to be uninjured was released when Mr Zhang went to a vets clinic for help.
Mr Zhang took the dog home and the pair are now reportedly indivisible.