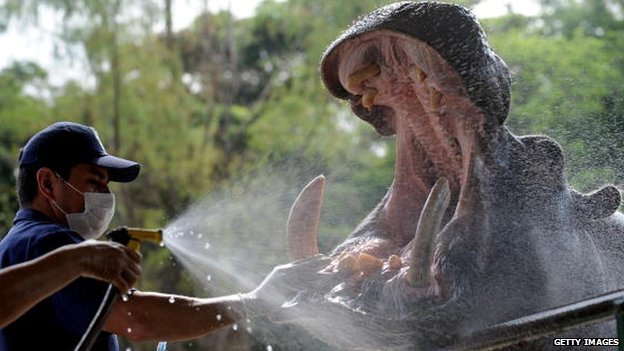 Colombia: Veterinarians in Colombia have started sterilizing hippos.
The event which introduced in a private zoo was set up by the infamous drug baron Pablo Escobar.
But some hippos living on Escobar’s estate in the northern province of Antioquia are reported to have been escaped.
Their population is being estimated to be around 60 animals.
There had been years of debate about what to do with them.
The hippos are found to have been growing well in the tropical Colombian climate featured with abundant waterways and rich vegetation.
These animals eat tons of vegetation and farmers’ crops.
There were also discussions about whether they should be removed totally.
But it is understood that many Colombians like them and used to care them as pets.
Five years ago, the authorities had shot and killed one of the hippos in the Escobar estate which caused severe outrage.
Following the incident, the hunt for them were called off.
According to the Colombian government, the hippos create a public safety risk and funding for their sterilization are met with money seized from drug traffickers.

Video on the sterilization of hippos