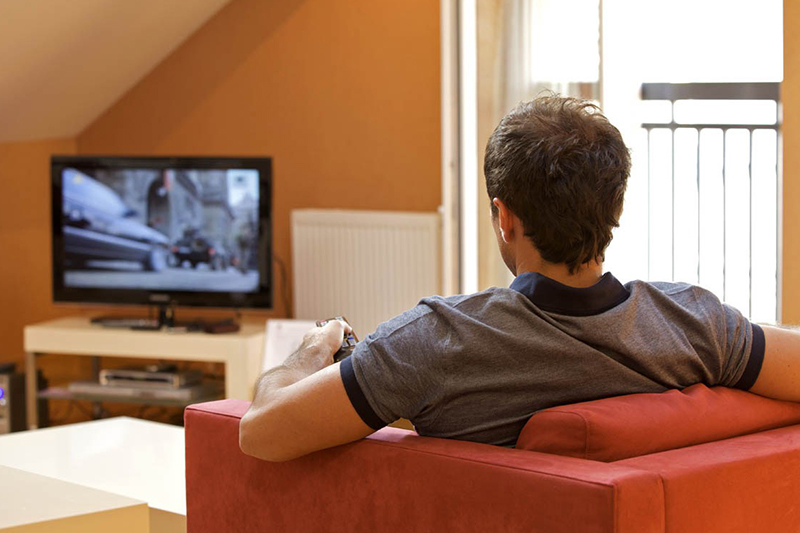 Even if you are a kid or an adult, it is hard for you to avoid television. People in the house are generally tuned into TV most of their time rather than doing something that helps in making their body active. In some houses, you may find the television perpetually “on” even without anyone watching it. We live in a digital era where no one has sufficient time for anything other than their work. Moreover, they spend their available time watching TV or browsing the internet. This makes their body inactive and sluggish. Even the regular workout session seems to be lagging behind, making it a lot more worse for the body to get rejuvenated. However, a recent study suggests that spending more than 2.5 hours in front of a television each day could sometimes increase your chance of dying from a blood clot in the lung.
–

–
Between 1988 and 1990, scientists in Japan asked 86,024 research participants who were between the ages of 40 and 79 how much television they watched every day. Over the following 19 years, 59 members died of a pulmonary embolism.The research which was published by the American Heart Association revealed that people who watched television between 2.5 hours and 4.9 hours of per day were 70 percent more prone to die from pulmonary embolism than those who watched TV for less than 2.5 hours each day.A new study reveals that watching a lot of TV can enhance the risk of a fatal lung blood clot. A lung blood clot, which is otherwise known as pulmonary embolism, starts as a clot in the leg or pelvis. This is due to inactivity of the body. If the clot breaks open, it can progress to the lung where it can get stuck in a small blood vessel.Hiroyasu Iso, who is the co-author of the study and professor of public health at Osaka University Graduate School of Medicine, in a news release, said that the pulmonary embolism occurs at a lesser rate in Japan than it does in Western countries. But he also mentions that it may be on the rise.According to the authors, the chance is likely greater than the study proposes as pulmonary embolisms are often unreported because the diagnosis is not easy.
–

–
Chest pain and shortness of breath are some of the common symptoms of a pulmonary embolism. These could also be the symptoms of other life-threatening conditions also. Some hospitals may not be able to help you with the diagnosis since it requires imaging that those hospitals may not be equipped with.Toru Shirakawa, who is a lead author and research fellow of public health at Osaka University Graduate School of Medicine says that the term ‘binge-watching’ to explain viewing multiple episodes of television programs in one sitting has become famous nowadays with the online video streaming made available. The fame may indicate a rapidly growing practice.As per the study, watching television and maintaining an inactive lifestyle is one of the primary cause of pulmonary embolisms. Obesity is the second leading cause that follows pulmonary embolisms. Cigarette smoking, Diabetes and hypertension can also make a pulmonary embolism. More than one-fourth of people who undergo an untreated pulmonary embolism die.
–

–
The study also records various ways which help the people to reduce their risk of a blood clot. Same kind of advice is given to the passengers on long flights.Toru Shirakawa advises the “TV addicts” to stand up, walk around or stretch after an hour of watching TV. You could also do this while you are watching TV. You just need to tighten and relax your leg muscles for around five minutes. He also added that drinking plenty of water and dropping weight may also aid in reducing the risk of deadly blood clots.According to the scholars, new investigations are needed to discover how new technologies such as tablets, computers and even smartphones affect the lifestyles of people. Hence, it is always better to take precaution than search for a cure. So, try to avoid watching TV for more than 2 hours and make it a habit to exercise and stay fit.