How to Get Rid of Toenail Fungus Fast 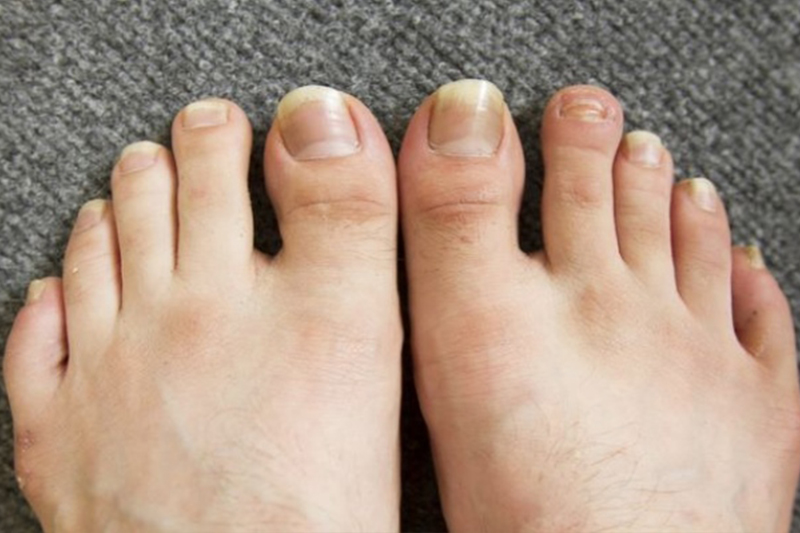 Nail fungus, or onychomycosis, is a common skin condition where a fungus infects a part of the nail including the bed, matrix, or plate. Symptoms include inflammation, swelling, yellowing, thickening or crumbling of the nail. It is usually not painful, unless the infection spreads. It is most often caused by moisture trapped in a warm dark place (because of shoes, this is why it more commonly effects toenails) which is the environment fungus thrives in. In some cases it can be caused by mold, or yeast. With dietary changes, supplements and certain essential oils, you can treat and eliminate the root cause of the toenail fungus,even when you’ve been struggling with it for years.The real key to removing fungus on your toenails is usually addressing your diet.
The dietary protocol for eliminating yeast overgrowth includes three steps:
1) Cutting off the supply of sugar that feeds the yeast and bad bacteria
2) Introducing beneficial foods like yogurt, fermented vegetables along with other probiotic foods that help replace good bacteria in the gut
3) Including more fibre, healthy sources of protein and nourishing fats in your diet
Here are some easy ways to get rid of toenail fungus apart from dietary changes. If the condition is painful or spreading further then do consult your doctor.

–
ACV is mildly acidic and can help prevent toenail fungus from spreading. At the same time, it kills bacteria and fungi. Soak your toenail in a solution of equal parts of ACV and water for 30 minutes and dry your toenail thoroughly afterwards. Alternately, make an antifungal exfoliating scrub by some coarsely ground rice flour with a few spoons of apple cider vinegar. Apply this paste on and around the affected nail and gently scrub the area. Do this a few times a week. This remedy will also help get rid of dead skin cells and keep your skin soft. Or soak your feet in a mixture of baking soda and ACV for 15 minutes and pat dry. Baking soda is fungistatic, which means it can prevent fungus from growing and spreading.

–
Tea tree oil has antiseptic as well as antifungal properties that help a lot in the treatment of toenail fungus. Apply a mixture of few drops of tea tree oil in one teaspoon of olive oil or coconut oil on the affected toenail. Leave it on for 10 minutes, and then use a toothbrush to gently scrub the affected nail. Do this two or three times daily until you are satisfied with the results.

–
White vinegar is one of the best ingredients for treating toenail fungus because it fights the infection and helps restore the skin’s pH. Soak the affected toenail in a solution of one part of white vinegar with two parts of warm water for 10 to 15 minutes.Rinse it off and dry the affected area thoroughly. Repeat twice daily until the fungus is gone.

–
Oil of oregano has antiseptic, antibacterial, antiparasitic, antiviral, analgesic and antifungal properties. This makes oregano oil an effective treatment for toenail fungus. Apply a mixture of two drops of oil of oregano in one teaspoon of olive oil on the affected. Leave it on for at least 30 minutes. Then, rinse it off and dry your toes thoroughly.

–
Mouthwash, which kills bacteria and germs in the mouth, can also be used to treat toenail fungus. The mouthwash has several compounds as well as alcohol that act as a strong antiseptic to keep away harmful bacteria and fungi. Soak the affected foot in a solution of equal parts of Listerine and white vinegar for about 30 minutes, and then scrub the infected toenail gently. Rinse it off and dry the affected area thoroughly.

–
OLE is known to control and treat fungus problems such as candida and tinea, along with being one of the ultimate natural cures for toenail fungus. The reason it works so well is it destroys the fungus from the inside out, as well as killing any bacteria or parasites which may be unknowingly living in your body.
You can mix mouthwash, ACV and white vinegar in a bowl and soak your feet for 30 minutes. Remove your foot and dry thoroughly with a clean towel. Then mix equal parts tea tree oil, thyme oil, coconut oil and olive oil and put a few drops of this mixture on the affected area and leave it for 15 minutes. You can use a toothbrush to gently scrub the oil mixture into the nail. Repeat this entire process at least once a day until the fungus has cleared up.