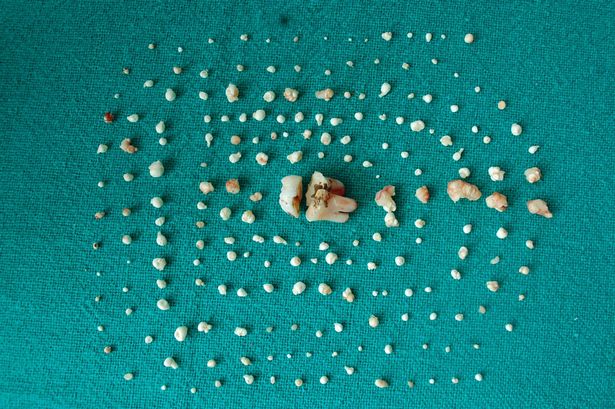 New Delhi: A seven year old girl suffering from severe mouth pain was taken to the dentist and found to have buried 202 teeth.
The Indian youngster was complained to her mum about her severe mouth pain and had swellings in her mouth.
Her businesswoman mother, living in the Gurgaon area then took her daughter to the dental doctor to find out the reason behind her severe pain.
X-rays showed that the youngster had been suffering from ‘Compound Odontoma’.
This is a complex tumor composed of normal dental tissues developed in an irregular way.
Usually doctors can see a few abnormal teeth-like structures in such patients.
But, more than 200 of them inside the mouth of a seven-year-old girl was absolutely shocking. The prime task of the doctors was to get rid of these teeth-like growths from the mouth of the minor girl.
The seven-year-old had to face two hour long surgery to remove the extra gnashes.
According to doctors the surgery was relatively simple and required high precision since a single mistake could cause jaw fracture which might lead to permanent deformation.
After surgery the girl, whose name has not been revealed was able to chew food and said that she has been feeling good.
According to a family relative, they are very happy about the successful surgery and after some days the girl could lead a normal life.
It is said that the family has thanked AIIMS dental care center for this remarkable achievement.