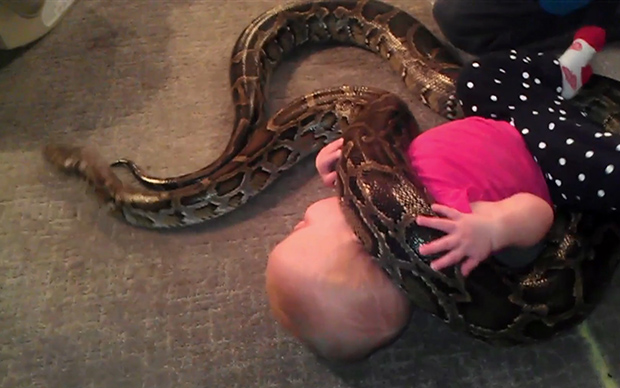 Michigan: A fourteen month-old female baby called Alyssa Guarino is seen playing with 13 ft long Python.
According to the father of the baby, playing with Python or snakes are not dangerous.
Alyssa’s father, Jamie Guarino, who is a professional snake handler said that the giant snake has not created any danger to his little girl while pythons simply have a bad reputation.
Mr Guarino, 34, has expressed his desire to educate people about snakes and according to him the reptiles can be loving pets despite their bad reputation.
As per the video released, one can see the baby lying on the floor playing with his ten-year-old Burmese python Nay-Nay.
By this video the father of the baby wants to show that snakes are not evil creatures and hence they can be cared as loving pets despite their bad reputation.
In the video, the snake was roaming around the baby and had no intention either to bite or swallow.
According to the father of the baby, the fear on snakes are mere a hereditary belief.

Video on Baby which plays with Python