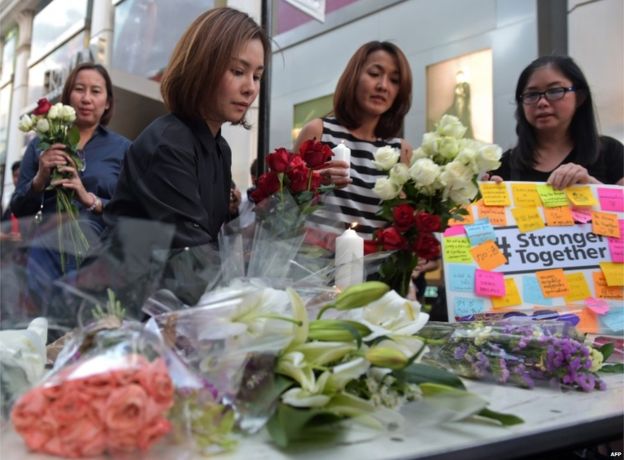 Bangkok: Residents of Bangkok are seen posting messages of unity and condolences alongside flowers with incense sticks at a downtown shrine where the bomb blast killed 20 people and wounded nearly 130 about two days back.
One of those who had made prayers at the Erawan shrine, was an office worker called Nuansupha Sarunsikarin.
She said that she was very much depressed to know that so many innocent people had lost their lives and added that she felt sad for them, their families and relatives.
Messages posted in English on a board at the shrine was with words asking people to be strong and be together.
The popular open-air shrine, built in 1956, houses the statue of Phra Phrom, the Thai representation of Hindu god Brahma.
It is said that there was a new explosion at a ferry pier used by tourists.
According to police, the blast might have connection with the bombing at the downtown shrine as it was also a pipe bomb blast.
Fortunately, nobody was hurt in the new blast where as in the downtown shrine blast, 20 people were killed while injured more than 120.
They said the bomb was thrown from a bridge and fell into the Chao Phraya River, where it exploded near the wharf where tourist boats used to stop.
Security camera video showed a sudden blast of water under a walkway at the pier as bystanders ran for safety.
Police spokesman Prawut Thavornsiri said that the blast could be related to the bombing of the shrine.
A tourist agency said that its customers from Hong Kong have canceled their travel bookings to Bangkok after the bomb blast at the downtown shrine.