A disastrous curve on the interstate motorway causes multiple accidents 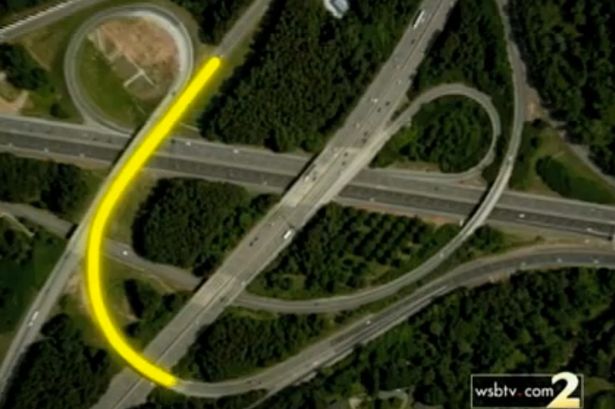 Atlanta(Georgia): A disastrous curve on Interstate motorway 285 just outside Atlanta in Georgia has seen multiple accidents during the past 18 months.
It is said that drivers become miraculously unconscious when they approach the sharp turn.
At least 10 trucks are reported to have overturned on the notorious bend during the past 18 months while several cars have also been involved in severe accidents.
Now it has been investigated that an ‘optical illusion’ on the busy road was the reason behind the series of bad accidents on the motorway.
The investigation conducted by a local news program, prompted the department of transportation to look into the matter with serious concerns.
Although the authorities couldn’t find anything wrong with the construction of the inclined plane, they could come across an optical illusion which mesmerizes the drivers to feel the sharp curve as completely straight.
A spokesperson for the Georgia department of transportation explained that the slight optical illusion at that sharp curve had made the drivers feel the curve as a straight continuation.
According to him, when the drivers take that sharp curve, they can’t notice the curve coming, instead they feel as if the road continues.
But the road is really straight after the 180 degree curve.

Video on the dangerous Atlanta curve