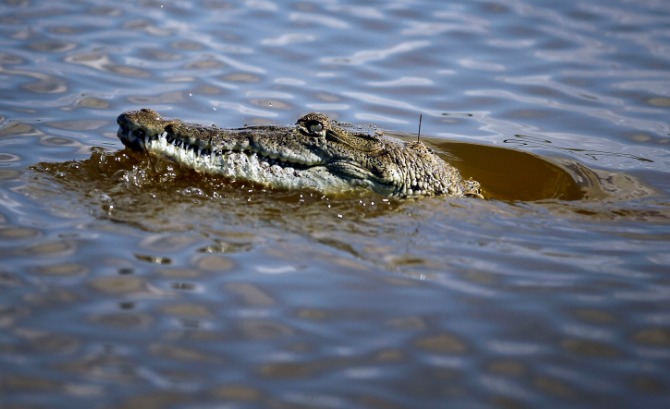 Mexico: Seven year old Manuel Abraham was playing with a balloon with his father near a Mexican river.
Meanwhile a monstrous crocodile locked its jaws around the son’s head and dragged him through under the water.
His horrified father was forced to watch the crocodile helplessly, as it leaped from under the water and dragged his seven-year-old son underneath before eating him alive.
Manuel Abraham, who had been playing with a balloon in the Barra Santa Ana estuary, Mexico, reported to have gone to the river bank when the balloon accidentally moved to that spot.
As the boy went to grab the balloon, his father could only watch in horror a crocodile which leaped out from under the water and locked its jaws around his son’s head.
When the animal was then dragging him under through the water, members of the public rushed to his aid, but the crocodile had disappeared by then.
It’s the eighth crocodile attack in a succession on humans in the area within a period of two years.
City officials have deployed the military, civil protection groups and fisherman to find the crocodile and the remains of the body.
But as per the reports the search operations have so far been unsuccessful. Nothing could be traced out by them by the nightfall.
Following the incident, the Environment Ministry has now ordered the capture of all crocodiles.
His father said that no-one had told him about the presence of crocodiles around the area in the city of Lazaro Cardenas in the west Mexican state of Michoacan.
While city officials immediately made every effort to have the boy found by nightfall, there was still no trace of the boy.
Heberto Camacho, head of the city’s Civil Protection unit, said that they had now received instructions from the Environment Ministry to bring all crocodiles’ insides to out and see whether they can find out the remains of the boy.

Video on the incident, boy eaten alive by a crocodile in Mexico