A wonderful Pig is born with two heads and three eyes 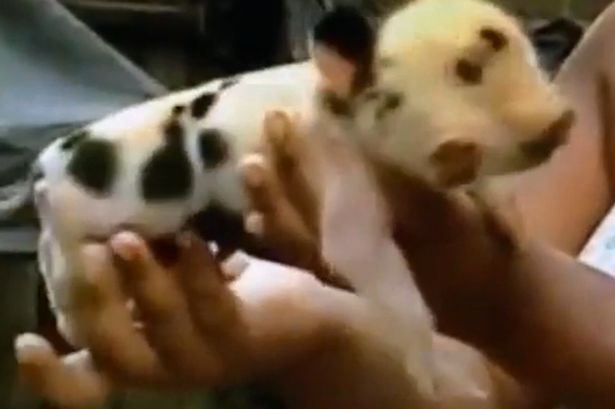 Robels (Colombia): A pig is said to have born with two heads and three eyes

in a farm house. The confounded owner is set to earn big money from the disfigured animal. The tiny piglet having two snouts and three eyes has become an instant celebrity as soon as it was born. A lot of offers are being received by the farm owner from people who want to buy the wonderful animal. Their intention is to use it as an attraction and drag the public into their own businesses ventures. Hundreds of locals from Robles, in Colombia, have also gathered to see the little piggy having normal black spots and pink skin. Pensioner Hegel Ortega Padilla, 68, who owns the farm said that he had never come across anything like this in his life before. The area is best known for making handmade gifts for tourists, but now the little piggy has

become the center of attraction of people arriving here. Hegel’s son, Fernando Ortega, said that the people asking about the pig, wanted to know more about it and take pictures. He pointed out that among the 25 other animals in the group, no other animal was born with any physical problems or deformity. Fernando Ortega has been working with pigs for over 10 years and the birth of one pig with two heads is his first experience. According to him, nobody knew why it was born with two heads. However, he consoled himself and said that it was a strange sensation. The father and son are unaware about what they could do with the animal while they were being advised by some superstitious neighbors to kill it.   Video on the piglet born with two heads and three eyes