Angry cyclist lifts car out of the bike lane 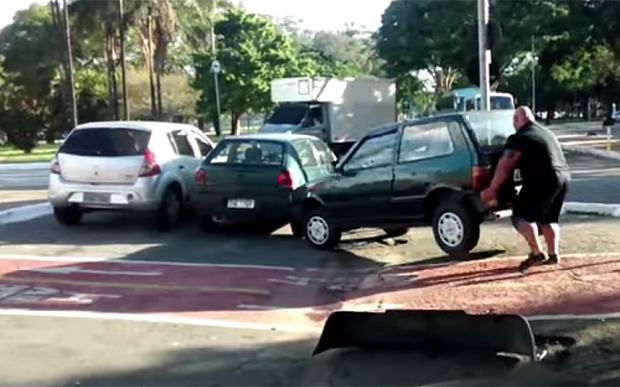 Portugal: A man was found physically removing a vehicle which had been parked obstructing his route along the road.
The actions of the angry cyclist were captured on a traffic camera installed on the road.
As per the footage he was seen lifting a car parked on a cycle lane and then continuing his journey.
His actions resembled as if he was in utmost confident about his physical strength.
The car had been left parked across the red road markings, making it impossible for any cyclists to pass without turning out of their designated area.
But rather than riding around the car, as most people might have done, the particularly frustrated cyclist was determined to physically remove the vehicle from his path with his bare hands.
Exhibiting impressive strength, the man displaced the car with obvious comfort, before calmly picking up his bicycle and continuing his journey along the road.
Onlookers in the background were cheered loudly as the man lifted the vehicle and kept aside as if nothing had happened.