Bicycle makes a comeback in Taiwan 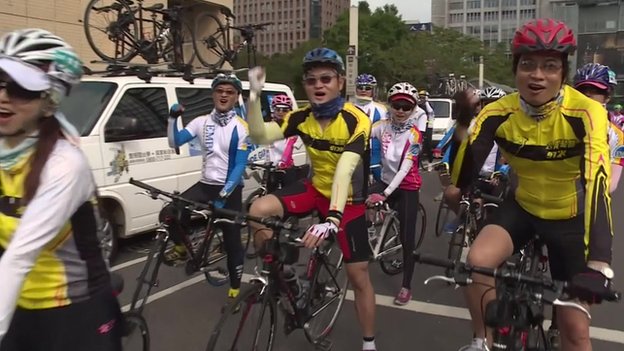 Taipei: People of Taiwan have been renewing their love affair with bicycles.
About three decades back bicycles were used as the main form of transportation by many families.
They were used to carry not only people, but also materials required for their daily life.
But with the invasion of modern civilization, motorized vehicles including scooters, bikes etc. started plying over many of the roads in Taiwan.
Now, people of Taiwan have decided to make a comeback by using bicycles which were off the roads three decades ago.
Moreover, Taiwanese have seen that cycling is a great way to keep fit and have fun in the daily life.
The annual Taiwan Cycling Festival which held since 2010, is a good sign of this changing trend among people.
In 2013, about 22,473 cyclists were participated in the races, tours and other activities conducted in association with the cycling festival.
Last year, the number of participants were 45,810, which is double of the previous year’s strength.
Apart from riding bicycles for fun, city dwellers have also started using cycles to get to their work site.
In Taipei, the capital city of Taiwan, a bike rental program has proven extremely popular by making people aware about the importance of riding bicycles.
Perhaps, Taipei might be the only Asian city that has managed to encourage people to ride a bicycle, instead of a scooter or bike as the main sort of transportation.
If this trend is going on, Taiwan will never suffer due to fuel shortage.

Video on news regarding the comeback of bicycles in Taiwan