Boyfriend fined for wearing clothing as his girlfriend 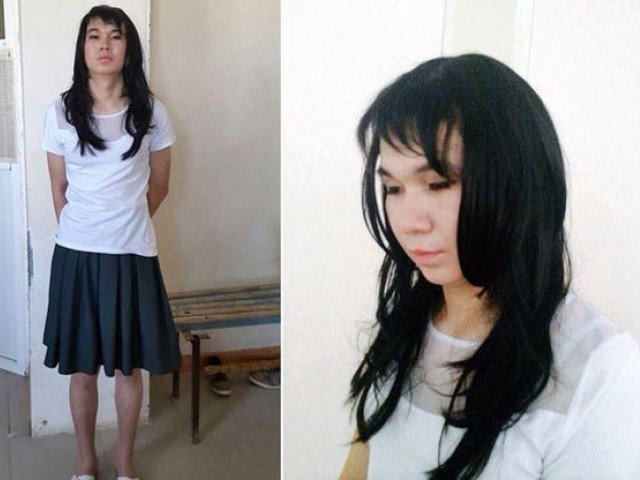 Zhetisai (Kazakhistan): A loved-up guy has been fined for dressing up as his girlfriend. His intention was to help her by attending the examination in place of her.
The boyfriend Ayan Zhademov’s girlfriend was too nervous to sit in her exams, and his effort to calm down his love was absurd.
Thus, the crazy 20 year old decided to do the test for her, wearing clothing similar to her
Exam invigilators in Zhetisai in south Kazakhistan were recognized Ayan as male when they heard his deep voice.
In the Unified National Testing, students have to go to University in Kazakhistan for attending the examination.
Then, Ayan went to sit for his unnamed 17-year-old girlfriend by wearing a black wig, Grey skirt and white blouse.
A spokesman for the exam board said that they suspected it might be another woman who had taken the candidate’s place and never suspected it was a man that had taken her place. They were not understood these malpractice, until he started speaking.
During the examination he tried to speak in a high voice and it was obvious for the invigilators to conclude that he was a male.
Despite Ayan being fined £1,400, other students were quite touched at the romance of his gesture.

Video on boyfriend fined for appearing examination for his girlfriend