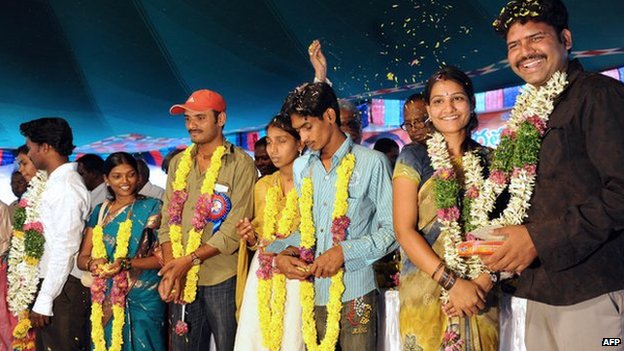 Meerut (India): One of the north Indian states, known as Uttar Pradesh is reported to have been trying to promote inter-caste marriages in the state by offering cash incentives to married couples belong to different castes.
As a preliminary step the government in Uttar Pradesh has offered 50,000 rupees ($810; £530) cash reward to the newly weds of the intercaste.
The officials have also made arrangements to provide a medal and a certificate to such couples.
As per the condition of the marriage either the bride or bride-groom must belong to any one of the scheduled castes existing in India.
The term refers to those come under the lowest class of the Hindu caste system.
Apart from this, they must have officially categorized as socially disadvantaged.
Inter-caste marriages in India are still not traditionally allowed and there have been cases of couples being murdered by their own families.
This treacherous act is referred as ‘honor killings against mixed relationships’.
Eight couples in the city of Meerut have already signed up and are due to take the pledge at a joint wedding ceremony to be conducted on February 8th, just ahead of Valentine’s Day.

Video on Inter-caste Marriages in India