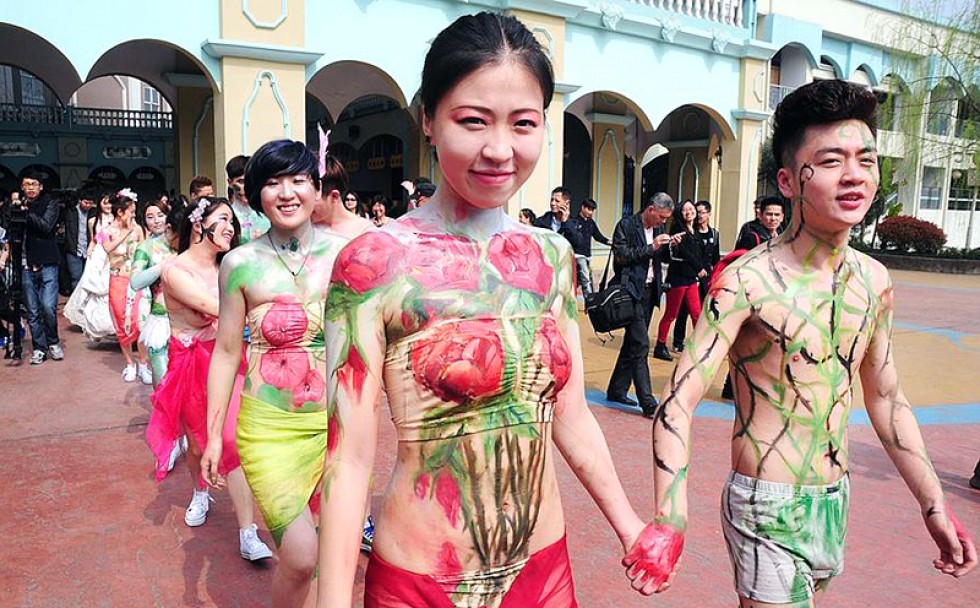 Beijing: Nowadays the cost of wedding in China is 30 times more than that was existed in 1980s. Currently, couples would have to spend about 2000 yuan ($310) for arranging a wedding banquet to where they have to invite their friends and relatives for attending their wedding ceremony.
Naked marriage is a wedding ceremony in China which costs only 9 yuan and that they have to pay to the ministry of affairs bureau as a legal marriage registration fee. This new form of marriage has been catching large public attention in China.
As per the thousands of years of Chinese culture, getting married was regarded as a family issue more than an intimate association between two individuals opposite gender. According to married couples in China, pure love is not enough to guarantee a happy married life in reality. Thus the lavish spending appears to be an absolute wastage as per their view point.
In naked marriage ceremony couples in body paint are dressed up only in their underwear. Recently couples had conducted naked weddings in Zhejiang province as a protest against modern Chinese values, which focus mainly on money rather than love.
During the mass protest, ten couples wearing only underwear were covered in body paint
As per the China.org.cn news website reports, the couples were celebrated their “naked weddings” at Hangzhou Paradise amusement park in Zhejiang province. Some of the pairs have been married for many years and said that they were rejecting modern Chinese values, where true love life is far behind money . In China, a naked wedding is arranged by couples having neither a own house or a car.