Egg laid by the largest bird goes for auction in London 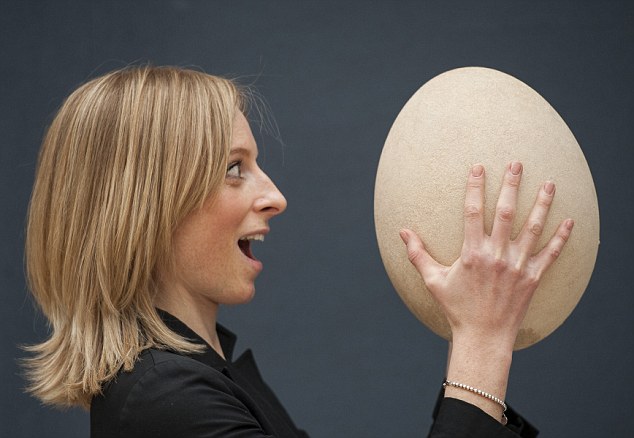 London: A rare huge bird egg is due to be auctioned at Sotheby’s in London.
Authorities are of the hope that it might fetch up to a price of £50,000.
Said to be laid by the elephant bird, the rare egg could be nearly 800 years old.
The colossal birds were flightless and native of Madagascar.
Elephant birds are now being extincted. Its extinction could be the aftereffect of hunting some 400 years ago.
The wonderful egg is just over 30 cm tall and appeared to be 200 times as large as a chicken’s egg.
It is said to be big enough to feed the members of a hungriest family.
The bird which laid the egg itself is thought to have been 3 m tall with weight around 450 kg.
Thus the elephant bird was the largest bird that ever lived with maximum height and weight.
Due to their colossal size and extreme rarity, their eggs were the center of attraction among rarities and curiosities in the late 19th-century.
There are thought to be just 25 preserved intact elephant bird eggs left in existence, with most of them in museums.
It is said that fossilized egg fragments can be seen on the ground in some parts of Madagascar.
David Attenborough, the natural history broadcaster, owns an almost complete eggshell which he formed by arranging the shell fragments collected by locals while filming Zoo Quest to Madagasar in 1961.
Another elephant bird egg is said to have sold in 2013 for £66,675. This is more than twice its expected value.

Video on the largest egg laid by a elephant bird