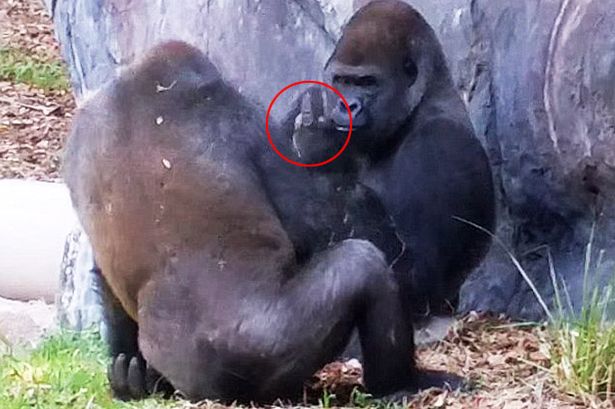 Florida: A tourist while enjoying wildlife had a tremendous luck to capture humorous actions of a cheeky gorilla which was showing its middle finger to a fellow ape.
As per the video clip the impatient silver-back Gorilla was seen loosing its temper when its playmate began throwing rubber toys at its head while it was attempting to relax.
But instead of calmly walking away, the gorilla avenged by appearing to flash its middle finger at the black-back gorilla with an intention to wind him up with a ‘KONG’ toy.
The humorous incident was at Busch Gardens, in Tampa, Florida.
Alongside the footage, the tourist who took the video wrote: “A very spunky Black back Gorilla continues to pester the older Silver back to play with him”.
His tactic was to throw a “KONG” at his fellow gorillas head, as if that was going to coerce the old gorilla into play mode.

Video on the actions of the ape