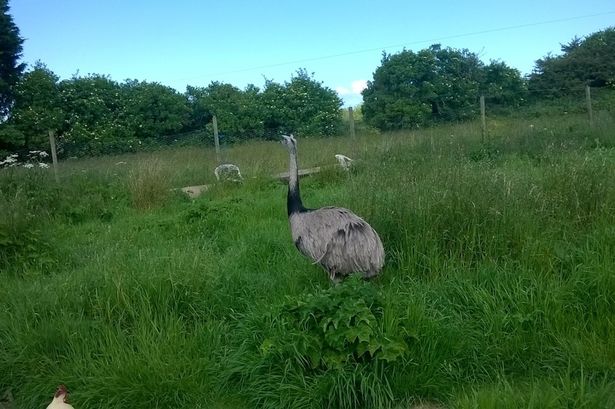 St. John: A rather unusual fugitive 5ft tall Rhea bird is reported to have escaped from its farm. Large-scale search operation has been launched to find out the amazingly tall bird. The hunt for the bird, Rosie-Lee has expanded across the island of Jersey from her home in St Johns But it is said that she had been so far succeeded from being not captured by its caretakers. She is one of three rheas, an ostrich-type bird, which bolted from their farm on the island of Jersey when they were forced to runaway by a flock of cows. Owner Seamus Nicolle who has authorized a nine-man search party to trace out the birds were succeeded to track down the two male birds, Marty and Rembrandt immediately, while Rosie-Lee is still found missing. The feathery fugitive is appeared to be about four and a half feet tall, grey colored, with long thin legs and a long neck. The owner said that the flock of cows which came from another farm, were not less than 100 in numbers. The birds were just got crept and bolted through the fence. Any animal would be scared if so many cows are found moving towards them. These birds were very quick, when they viewed the flocks of cows moving towards them. The birds were

lying down because they were appeared to be too much tired. The owner said that she could survive in the wild, as long as she had enough supply of water as well as grass to quench its thirst and hunger respectively.   Video on 5 ft tall Rhea birds