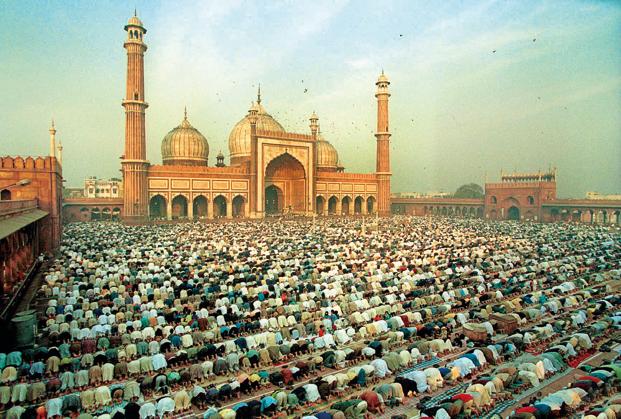 New Delhi: By 2050 India will be a country in the world with highest number of Muslim population. This report is as per the comprehensive studies conducted by the Pew Research center. Currently the country with highest number of Muslim population is Indonesia. It is said that India would overtake Indonesia in this regard by 2050. Thus Hindus will come to the third position while comparing with the global population as a whole.
The Muslim population in India is likely to exceed by 18% (310 million) while Hindus comprise of 77% of the country’s total population. In 2010, the percentage of Hindus in the country was about 80%, which is likely to come down to 77% by 2050. At the same time, over the course of four decades, the Muslim population will be increasing by four percentage points from 14% to 18%.
From 2010 onwards Indonesia has been the largest Muslim population (209 million) followed by India (176 million) and Pakistan (167 million). The largest population of Hindus as of 2010 is India, followed by Nepal and Bangladesh. By 2050, India and Nepal will be the only two countries in the world with a Hindu majority population. As per the analysis study this population status will be the same as that of 2010.
The most interesting aspect from the study is the fact that by 2050, the number of Muslims will nearly equal to the number of Christians in the world. Over the course of four decades, the Christians will go from 2.17 to 2.92 billion while the Muslims register a fastest pace of growth from 1.6 billion to 2.76 billion. The study notes that the population of Hindus will go from 1.03 billion to 1.38 billion. The world’s total population itself is expected to rise up to 9.3 billion, thus creating a overall rise of 35%.
Region-wise, Muslims are likely to be overridden in the Asia-Pacific region but their size itself is supposed to reduce from 62% of 2010 to 53% in 2050. They are also projected to surpass the Hindus as the largest religious group in the region. Hindus will also be predominantly living in the Asia-Pacific region by 2050.

Video on the Muslim majority population in India