Man arrested for forcefully taking his daughter to school 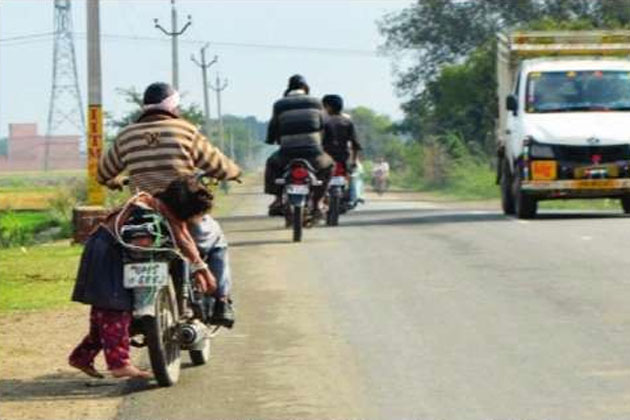 Mathura (Uttar Pradesh): A man in India is reported to have taken his eight-year-old daughter to school by tying up her to his motorcycle.
The 40-year-old man was arrested after local newspapers in Uttar Pradesh state published photos of the tied-up girl lying on the motor cycle.
Onlookers accuse the man of cruelty. But he said that his daughter had an exam and was reluctant to go to school.
The incident is appeared at a time when the prime minister has launched a huge campaign to educate girls in India.
It took place in a village in the district of Mathura recently.
The man is said to be a father of two sons and three daughters. Currently he is working as a security guard at a private school.
Police said that the man had persuaded the girl, the youngest among his children, to go to school, particularly since she had a test to write.
The child was promised sweets and gifts, but when she refused to respond positively, her angry father tied her to the back of his bike with ropes and took her to school.
Mathura superintendent of police Shailesh Pandey said that he had been charged with breach of peace According to the man who spent a day in the cells, his act regarding the controversial matter was correct.
He said that his daughter won’t die if he took her to school and she would be in a dead state if she did not study.
India currently registers a female literacy rate of 64% when compared to the 81% literacy rate of men.
Prime Minister Narendra Modi has recently launched a campaign asking parents to educate their girls.
According to campaigners going to school is still a distant dream for many girls living especially in rural India.
Many parents think that it is not necessary to educate their daughters.

Video on Indian-man forcefully taking her daughter to school