Pope changes his clothes from a fast food restaurant in Bolivia 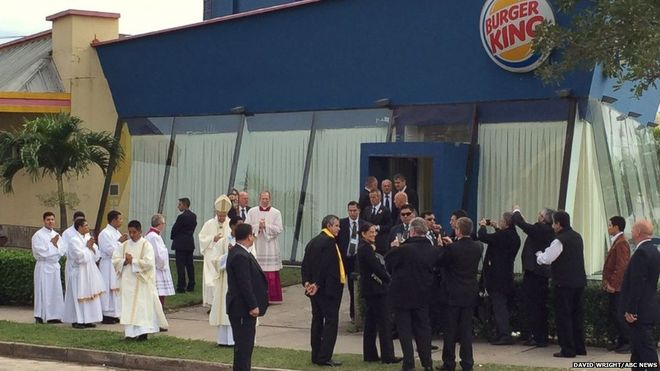 Santa Cruz: Pope Francis who was on a visit to Bolivia is reported to have changed his clothes from a fast food restaurant known as Burger King. The cloth changing was to get himself ready to address an open mass in the city. So, the leader of the Roman Catholic church was stopped at the fast food restaurant in the city only to make a formal preparation for the event. The restaurant was spectacularly decorated with white curtains to welcome the Pope. He had been riding around in the Pope-mobile for about half an hour before bringing a stop at the Burger King. The restaurant had been reserved three days ago for the event because it was so close to the venue chosen for the mass. Throughout his trip to South America, Pope Francis had been stressing the need for social justice. In his speech, he always wanted to blast hard against the present culture where money rules, rather than service. Francis has persuaded the people of Bolivia to look beyond the chase for profit and also asked them to look out for one another. Bolivia is one of the poorest countries in South America, where 60 percent of the population has been living below the poverty line. By late afternoon, the Burger King was reopened for business. However, the altar and the papal throne from the mass were still inside. Christian Vaca, the assistant manager of the Burger King, is expected that the visit of Pope to the fast food restaurant would boost their business. According to him, the business of the restaurant had

been hopping, as long as the Pope was there. He is also added that the Pope’s presence was really a blessing to the restaurant.   Video on Pope’s visit to Bolivia