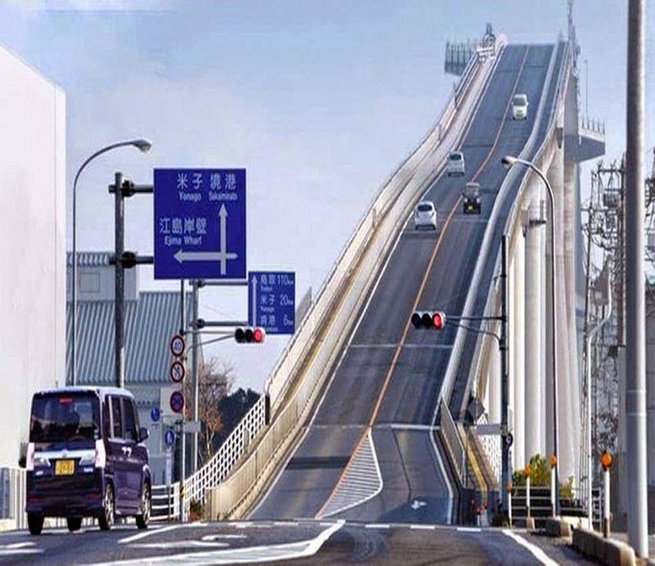 Sakaiminato (Japan): The spectacular concrete road bridge which stands across Lake Nakaumi in Japan is a wonderful overpass construction with amazing twists and turns for over a mile long.
This is an important bridge in Japan that links cities of Matsue and Sakaiminato and assumed to be a terrifying roller-coaster bridge.
The magnificent up and down slopes on the bridge forces drivers to navigate down a steep descent.
This facility is to enable ships to pass underneath comfortably.
The Eshima Ohashi Bridge in Japan is the third largest of its kind in the world.
The incredible slope having a gradient of 6.1 percent makes it look more like a roller-coaster rather than a bridge.
But it’s still not the most terrifying overpass in the world.
In this regard, the Sidhue River Bridge in China holds the top position.
It stands at an incredible height of 1509 ft. It is known to be as the tallest bridge in the world and connects the cities of Shanghai and Chendo in China.
The Millau overpass in France comes next. When it opened in 2004, it was the tallest vehicular bridge in the world and it still stands taller than the Eiffel Tower in France at its highest point.
Number three goes to Monkey Bridges in Vietnam. This has been made from one single bamboo which is wide enough for feet while another for an unsteady handrail. They got their name from the monkey-like posture of people trying to cross it.

Video on the roller coaster bridge in Japan