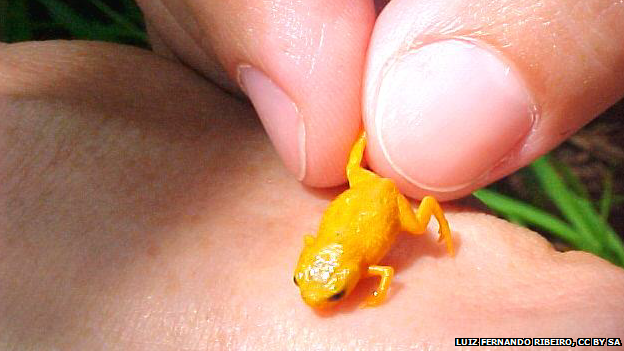 Brazil: Scientists are reported to have discovered seven new species of tiny frog on seven different mountains in South-Eastern Brazil.
The unique feature of the cool cloud forests of this region is its climatic condition.
They are separated by warmer valleys and remain as isolated peaks.
In that isolated region, there are already 21 known species of Brachycephalus frogs.
The discovery of the seven new arrivals has increased that count to 28.
Majority among these species are less than 1 cm long with colorful, poisonous skin.
This feature is to help them escape from being tiny meals to other carnivores.
The aforesaid newly discovered species in the open access journal PerrJ, are the result of five years expeditions in the deep forests.
Marcio Pie, a professor at the Federal University of Parana in nearby Curitiba, said that he had climbed more mountains than he could remember, on the way to achieve this feat.
These elevated dense forests near Brazil’s southern Atlantic coast are also a fertile place for ecologists to explore and conduct studies.
The Bracycephalus frogs are found to be very sensitive to the environments they have been living.
Hence, even a temperature change from mountain to valley appears to be an obstruction to these species.
This is the reason as to why the population on each mountain top slowly developed into separate species.
The little creatures are rather restricted in terms of just how different they can become.
As some of the very smallest land-dwelling vertebrates, much of their anatomy is optimized to this tiny scale.
For example, they typically have three toes and two fingers, instead of the five toes and four fingers generally found in most frogs.
The most evident difference between the Brachycephalus species, including the seven new ones, is their skin.
This can vary quite a lot in how bumpy and rough it is, and quite dramatically in its color with more vibrant tones.
Normally, the skin of these species reflects higher levels of deadly chemical tetrodotoxin.

Video on newly found out frog species in Amazon forests