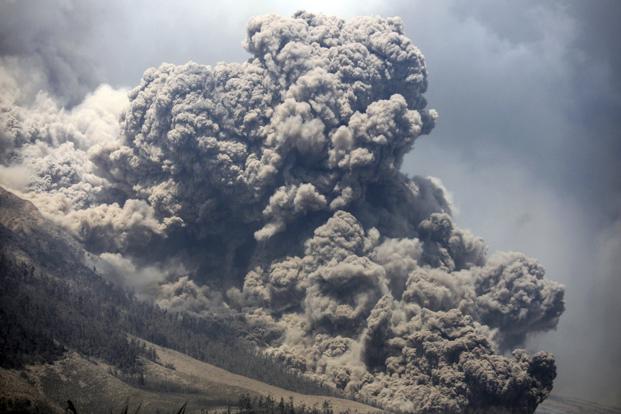 Tanah Karo(Indonesia): A volcano in western Indonesia’s Mount Sinabung on Sumatra erupted letting out powerful thick fumes and clouds of gas into the air.
Authorities monitoring the developments of eruption have ordered an highest level of alert to the people residing nearby.
Hot ash from top of the volcano has been on its way down the slopes of the mountain and appeared to have covered up to a distance of 1.5 miles.
However, no injuries were reported till this time due to the eruption.
Indonesia’s expert regarding volcano eruption, Surono, has urged the villagers to stay away from the main danger zone that extends up to 4 miles southeast from the volcanic crater.
According to him the growing size of the lava dome has been appearing very unstable.
Authorities have warned people against a fall of boiling rocks mixed with gases from the mountain anytime.
Even though over 50 separate eruptions were counted, villages located outside the evacuated area are said to be out of danger.
More than 2,700 people were already evacuated from villages around the crater into several temporary shelters.
Mount Sinabung is a 2,460-meter tall volcano in the Karo district of North Sumatra and had erupted earlier in 2013.
At that time a cloud of black ash and rocks were thrown up nearly two miles into the sky.
Authorities were then evacuated villages along the slopes of the mountain as a precautionary measure.
Nearly 1,300 people were forced to flee their homes to escape from the devastating action of the volcano.
The mount Sinabug, is considered to be as one among the 130 active volcanoes in Indonesia.
In the recent eruption, it has been releasing smoke and ash more than 1,600 feet into the air.
The mountain had been in a dormant state for the past 400 years.
Since 2010, the volcano started erupting at irregular intervals.
During the previous blast, at least 17 people were killed following an eruption at the mountain, while over 2,700 people were evacuated from nearby villages.

Video on the eruption of mount Sinabung in Indonesia