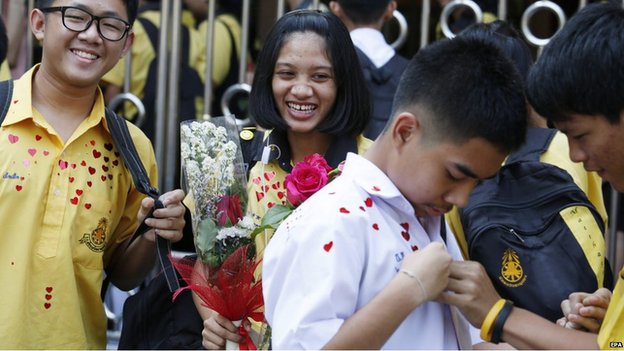 Bangkok: For many young Thais, Valentine’s Day is said to be an occasion to lose their virginity.
But this year, it is said that they are being motivated to visit temples instead.
Currently, Thailand is one of the highest teenage pregnancy rated country in the world.
According to the Public Health Ministry, 54 out of the 1,000 Thai girls aged between 15 and 19 are seen getting pregnant each year.
The increasingly popular Valentine’s Day in Thailand is an imported Western culture.
Even the school going pupils in the country mark the day by sticking heart icons to their shirts.
This year, in addition to the persuasion to visit temples, public health department has decided to distribute piles of condoms through various health clinics and hospitals in Bangkok.
Pirapong Saicheua, an official of the city authority, told Reuters news agency that if kids really wanted to love each other, it would be better for them to go either for fishing or to conduct prayers in temples.
One of the main income sources of the country is tourism, which has been flourishing day after day.
But, the sex tourism in Thailand is globally notorious. In-spite of this feature, it remains as a conservative country.
Out of 1,824 people infected with HIV in the Bangkok metropolitan area in 2014, more than half numbers (55.4% ) were under the age of 25.
The proposed distribution of 3.5 million condoms costs around 5 million baht ($150,000,ie. £100,000) for the year, including Valentine’s Day.