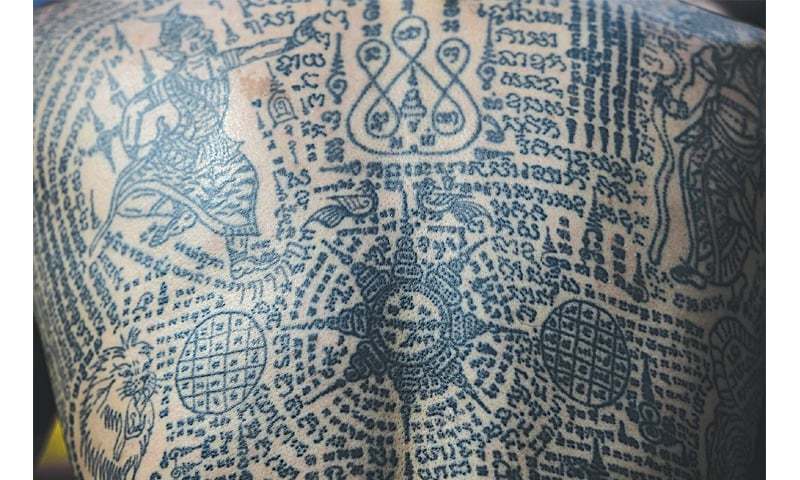 Bangkok: World famous and spectacular Bangkok Tattoo festival will be celebrating on March 25th.
Tattoo Festival in Bangkok is an event where hundreds of Thai natives gather together at Wat Bang Phra to receive powerful protective tattoos. These are known as “Sak Yant” tattoo.
These special cultural designs, to be printed on human bodies are assumed to have the blessings of miraculous spiritual energy as they are performed by powerful monks belong to their traditional religion.
As far as the Thai people are concerned, these are not just decorations for the skin, but are sacred talisman which offer protection against evil spirits, bad luck or even bodily harm.
During the aforesaid Tattoo festival, people gather at the temple for blessings and renewal of the power of their tattoos or to get new ones.
Thousands of Thai natives gather at Wat Bang Phra, located in the Nakhon Chai Si region which is about 50 km west of Bangkok, where the Wat Bang Phra Tattoo Festival is celebrated.
Apart from the regular traditional tattoos some people show great interest in getting the animal tattoos printed on their skin.
On this auspicious day, thousands of believers visit temple for taking part in a special prayer ceremony honoring the late sacred tattoo master, Luang Pu Poen and have the blessings from the spiritual powers.
By this temple worship, it is believed that devotees can also have their tattoos re-consecrated.
The temple is famous for the supernatural power behind sak yan, magico-religious tattoos applied by monks.
During the ceremony, some devotees go into an enchantment, fiercely acting out the characteristics of the animals and mythical figures in accordance with the Tattoos on their bodies.

Video on Tattoo festival in Thailand