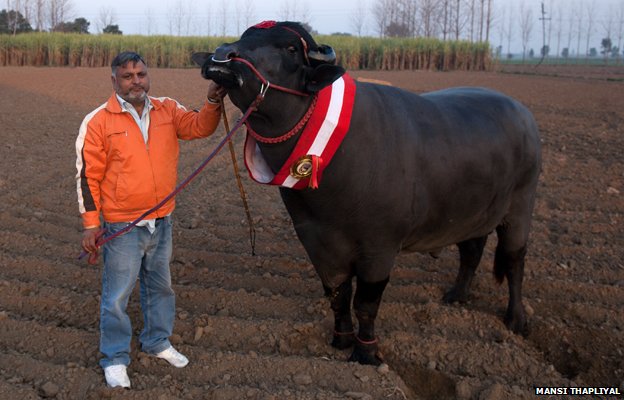 Sunarion, Haryana (India): It is really wonderful to hear that the semen of an Indian Bull costs $3,000. the bull called Yuvaraj, is a handsome animal having oiled backward curved horns. The weight of his 10 feet long, 5 feet 8 inch tall body is 450 kg (990lbs). His body looks spectacular with grey-black coat and a slim bushy tail. The owner of this bull is Karamveer Singh, a 47-year-old third generation farmer belongs to the Haryana state in India. According to him the domestic animal is not just another bull and referred it as a special brand.
Yuvaraj is a Murrah bull which is considered as the best of the 13 recognized buffalo breeds in India. Moreover it is a cash cow if ever there was one.
According to Inderjeet Singh, the chief of India’s Central Institute for Research on Buffaloes, Yuvraj as a “champion breeding bull”.
His semen is now possibly the most expensive in India, costing up to 350 rupees ($5.65; £3.75) for a dose. This is possibly more than 10 times the average.
A single ejaculation, triggered with the help of a teaser animal and collected in an artificial vagina, provides 500 to 600 sperm while each dose contains 20 million sperms. Thus it is assumed that Mr. Singh earns anything between three and five million rupees every year selling the stuff, which he collects in thin frozen strips, preserved at -196C in 50-litre containers of liquid nitrogen. Semen traders, armed with cryogenic flasks, drive from all over India and stand in queue at Singh’s door.
Yuvraj also earns money by winning state-sponsored buffalo and livestock contests, collecting up to 300,000 rupees ($4,853; £3237) each time. The spacious rooms in Singh’s home glitter with the bull’s trophies. It is Singh’s tender loving care that helped Yuvraj to become the winner bull.
Plenty of people often come to buy this wondrous animal. Two years ago, a businessman from the southern city of Hyderabad had offered 70 million rupees ($1.14m; £757,000) for this bull. But Singh had no intention to sell him.

Video on the champion breeding Bull