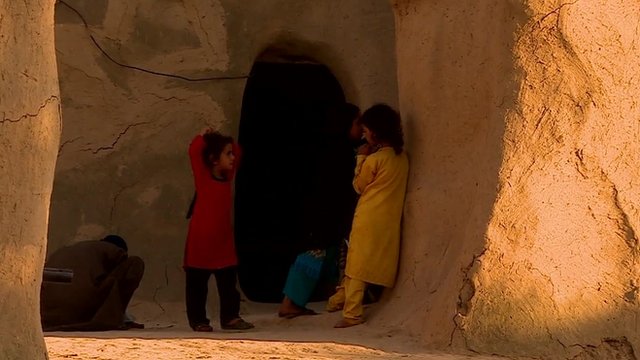 Islamabad: The term “cave dwellers” is likely to raise up prehistoric images in everybody’s mind. Later caves have served as one of the earliest dwelling locations for human beings. But in Pakistan these man made caves have been using as homes by some people today.
These cave dwellers in Pakistan can be observed just 40km (25 miles) away from the capital Islamabad. Thus, near the city of Hassanabdal, many families continue to live in man-made caves because they are too poor to afford regular houses.
Even in this modern age, about 100 people live in various caves in the country. While going to Islamabad from Dhoke Ratta via the Boring Road towards I.J. Principal Road, there are graveyards and farms over a raised ground near a nullah.
Beneath the graveyards, some families are found living in caves. Even in this highly civilized era, these cave-dwellers use lanterns, wood and dried cow dung to light up their residence and burn stoves for cooking.
These cave-dwellers said that they had been living in a slum area and the same was demolished by the Pakistan Railways in 2001.
After the demolition of their abodes, they were forced to dig caves and started living in it. Only one facility of the modern day is available to these cave-dwellers. That is the right to vote. Their names have been included in the voter list. During the 2013 election Sheikh Rashid Ahmed was elected from their constituency.
The inhabitants of these caves have no resources to construct houses or shift to any residential area. they work as laborers at the Islamabad fruit and vegetable market to find their living means. Women in the caves do domestic works in the nearby houses to supplement the income of the male members of their families while children spend the whole day playing in the railway ground. There is no thought of education among these people.
During rainy season, they leave the caves and take shelters in the nearby mosque and under the shades of shops to avoid any untoward situation.