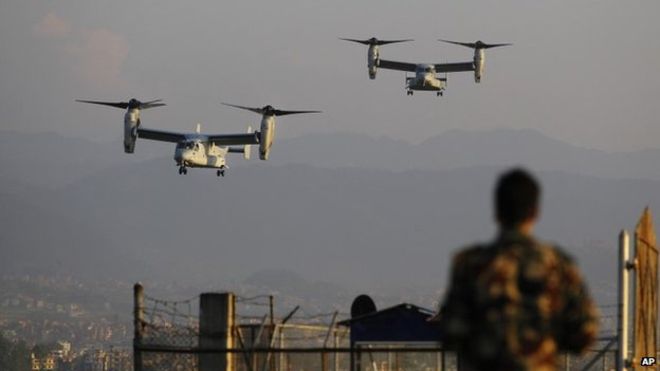 Kathmandu: Relief troops and emergency aircraft facilities from the United States have arrived in Nepal to deliver aid to people in remote areas, suffering by the recent devastating earthquake.
Relief efforts near the epicenter have been hampered by a lack of suitable aircraft.
The US relief team arrived in Kathmandu includes about 100 marines, two helicopters and four Ospreys which are capable to perform vertical take-off.
Their arrival was in the midst of the existing ban at Nepal’s only international airport on larger aircraft carrying aid from landing because of concerns over its runway.
In the recent 7.8 magnitude earthquake in Nepal, more than 7,000 people are reported to have died. More than 14,021 people were injured.
The epicenter was in the Gurkha region, and many roads to the hilly district are unusable due to severe landslides.
The six US aircraft are due to begin their relief operations immediately. Their main relief supplies are shelters.
Brig Gen Paul Kennedy said that their search and rescue teams were waiting to go out to the remote areas.
Meanwhile a Nepali government spokesman said that the new restrictions on planes landing at Kathmandu airport would not affect international aid flights.
Planes heavier than 196 tonnes had been allowed to land since the earthquake while restrictions have been imposed because of hollow regions which might have formed on the runway.
Landslides and poor weather have hampered efforts to deliver aid to isolated areas.
According to government sources the death toll could go up, as search and rescue efforts are continuing in several hill districts including Dhading, Rasuwa and Sindhupalchok.
While the vast majority of casualties were in Nepal, about 100 people are reported to have died in neighboring India, China and Bangladesh.
Last day, Nepal police has released a list of foreigners who had been killed, injured or missed.
The largest group of other nationals affected are Indians, with 39 known to have died and 10 injured.
Meanwhile, the EU envoy to Nepal, Rensje Teerink, said that the whereabouts of 1,000 EU citizens was still unknown.

Video on the arrival of US planes and marines