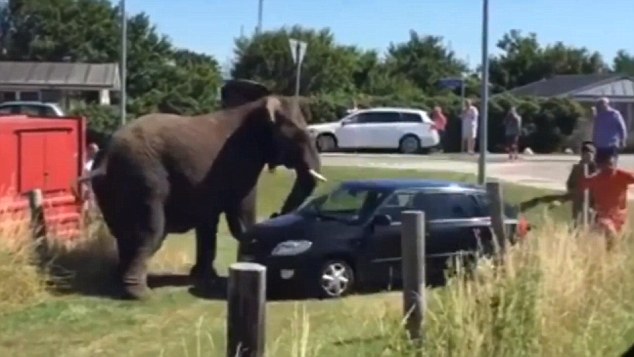 Denmark: Three ill-treated circus elephants are reported to have turned violent by smashing up a car and terrorizing tourists. The unfortunate incident was in a beach town in Denmark. The giant animals named Lara, Jenny and Jungla were being led down to the water to cool off themselves after a hard day performance. When they were forced to leave the water, the animals became restless, prompting one of the circus employees to beat the animal. Instead of calming down, the torture made the three animals to become even more demoniac. By avoiding their handlers, they started rampaging through the seaside town – smashing and lifting materials with their trunks and chasing terrified holidaymakers. The feared tourists were scattered as the elephants walked over a low fence towards a stationary vehicle. Without any hesitation the elephant charged the vehicle, using its trunk and lifted it several feet above the ground before throwing to smash it off. The luxury Vauxhall car could be seen with its window and bonnet smashed completely. As per the report from 9 News.com, a woman was also injured badly when one of the elephants knocked her down to the ground. During the fall, her head was badly hit on the paving stone. However, the circus authorities were refused to take any responsibility of the incident. They said that the tourists should not have been so

close to the elephants and the cars destroyed were parked at wrong places. The organizers also said the rampage would not cause the circus to reconsider forcing elephants to

take part in performances, but reportedly confirmed that they would be working with the police in the future to ensure that the path of the elephants were not obstructing by holidaymakers.   Video on the violent nature of the circus elephants in Denmark