Wacky themed restaurants in Taiwan appear to be profitable 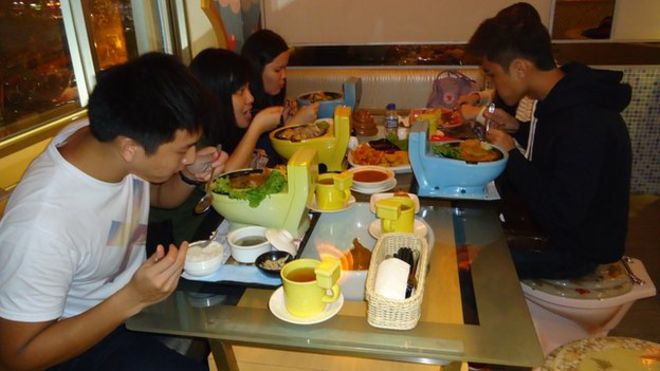 Taipei: From toilets to polar bear caves, some pretty freaky restaurants have opened in Taiwan in recent years. Restaurant owners in Taiwan have been constantly coming up with new ideas to attract customers in a highly competitive dining-out market. Now, even hotels in the country are getting in on with such movements. In certain places, the new ways of capturing business have been proved to be not only great fun, but also great business. An interior designer who graduated from the East London School of Architecture, Mr Wu wanted his guests to have fun while enjoying food. Mr Wu

said that he was thinking of combining art and architecture, the idea that he got after coming across pictures of children’s slides and while doing research regarding that. As per the reports, the hotel has been making good profit since it opened last July and this transformation is mainly because of the slide. As per the analysis report, 40% of the guests coming to the restaurant are families. To avoid getting disturbed, the slides on the second floor are only opened from 11 a.m. to noon and from 3 p.m. to 6 p.m. Visitors can use it in place of the lifts to reach the checkout desk as it is very much interesting. Henry Chiu, is the owner of the famous Hello Kitty Kitchen and Dining restaurant in Taipei. His restaurant is covered with Hello Kitty images, from the giant bow-shaped booths to Kitty-shaped ceiling lights, as well as cakes, hamburgers and tarts. He wanted to create an atmosphere that reflects Hello Kitty feeling to people. The restaurant is popular with both little girls and grown-up women. At Carton King restaurant, customers eat food served on cardboard plates and drink from cardboard cups by sitting on fancy cardboard chairs. The restaurant possesses even a paper hotpot that can be put over a stove. The furrowed cardboard is amazingly strong as each chair can accommodate two adults weighing up to 150 kg. Majority of the materials in the restaurant are anti-flammable or coated with flame-resistant paint.   Video on Hello Kitty restaurant in Taiwan