A wonderful cow with two heads auctioned in Australia 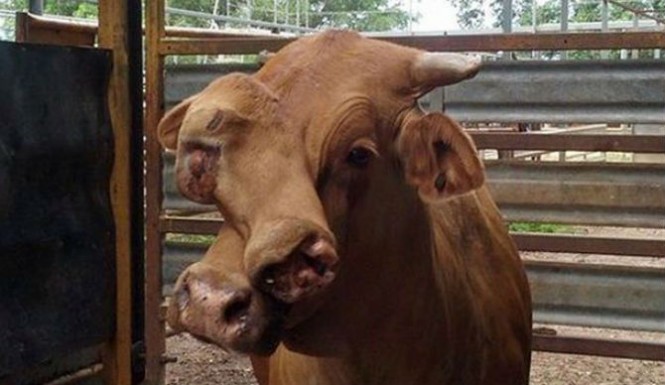 Queensland: At an auction center in Queensland, Australia a deformed cow has grabbed the attention of viewers. The cow having a wonderful look was with two almost developed faces.
It has a normal head just like any other cow, but on top, there is another face, which bears one eye, a single tooth and two well functioning nostrils.
This amazing phenomenon is said to be the outcome of genetic variation.
The deformed cow with two faces has stunned the viewers at the auction center from where it had been auctioned for $400.
Images of the unusually looking beast were posted on the Mareeba Saleyards Facebook page ahead of the auction sale.
The advertising post was mentioned the animal as an “interesting bullock”, and had given a well description about its second face which bears an eye, one tooth and working nostrils.
Owners of the yard, where the cow was born, believed that the unusual deformity would be due to an error in genetic engineering.
Fortunately, the animal has no health issues related to its freaky look.
In some countries with unusual cultures, such a beast would probably be considered as sacred.
But in the land of barbecue, the deformed two-headed cow may be destined to turn into burgers.

Video on the wonderful cow