Wrestlers fight with bulls in China 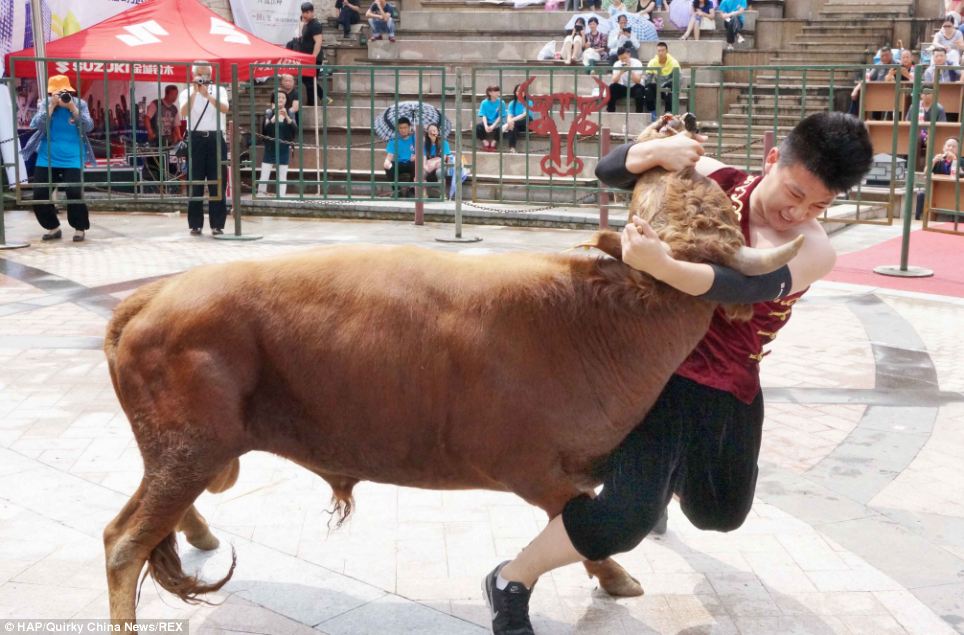 Jiaxing (China): Bull wrestling may not appear as a fun entertainment for many, but an annual festival has attracted many with wrestlers playing their mighty body against such beasts.
Although it is not as similar as the cruel as bullfighting, the annual event held earlier this month had resulted to growing amount of criticism from animal rights groups.
But, every year, it is still going ahead in the city of Jiaxing, in eastern China’s Zhejiang Province.
Competitors have to work hard and see who can wrestle the bulls to the ground in the shortest amount of time.
Locals defend the event as part of their cultural heritage and this was for the fourth time that the same had been carried out as a regional competition.
Bull wrestling was previously held only in villages of remote regions of the county where the strongest men have to throw down the water buffalo bulls weighing above 350kg to the ground.
This year, more than 100 contestants from across the country, as well as foreign participants were taken part in the contest, that has been gaining popularity.
The organizers claim the event as a harmless alternative to bullfighting as the animals participating are not being killed.
Contestants are declared won the competition as soon as the bull is thrown to the ground.
Almost in all cases the feat can be accomplished in under three seconds.
Han Haihua, chairman of the contest is of the hope that the increasing popularity of the traditional event would become as popular as Spanish bullfighting, as it is being less harmful to the animals.

Video on the Chinese Bull-fighting