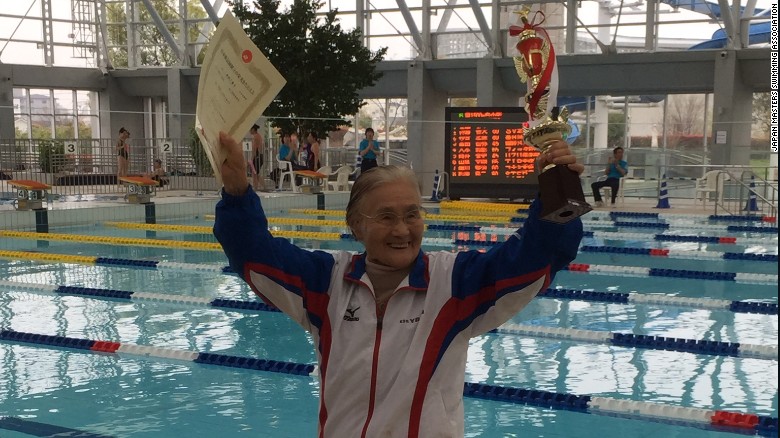 Tokyo: A Japanese woman aged nearly 100 years is said to have created a record in 1500 meter freestyle swimming.
Thus she became the first 100-year-old to complete a 1,500m freestyle swimming in a 25m pool.
The woman named Mieko Nagaoka is said to have started her swimming practice only at the age of 82.
She has been holding the record in her age category for the same distance in a 50m pool.
She achieved the latest feat in just over one hour and 15 minutes, using backstroke all the way.
The venue of the aged persons swimming competition was at Matsuyama.
She was the only person taking part in the competition of age range – 100 to 104.
Nagaoka is already there in the world record board for her age group.
She is being awarded the status by the international swimming federation (Fina), as she has secured 24 titles over both short and long distances.
Her latest achievement is now expected to be recognized by the Guinness book of World Records.
Nagaoka began swimming practice as a therapy for her knees.
She was forced to start training sessions several times a week like her family members who are also active swimmers.
Since then, she has been attending swimming competitions around the world.
After reaching 100 last year, she has released a book entitled ‘I’m 100 years old and the world’s best active swimmer’.
She told Japan’s Kyodo news agency that she wanted to swim until her 105 age and expressed her desire to live that long.
According to the official census records of 2014, Japan has a rapidly rising aging population with 59,000 centenarians
Last week, a Japanese woman called Misao Okawa, considered to be the oldest person in the world was died at the age of 117.

Video on the 100 year old woman swimmer from Japan