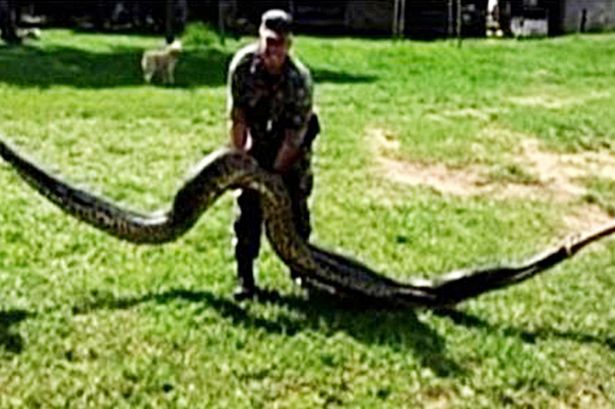 Brazil: A giant anaconda measuring over 23-feet length is reported to have been captured by soldiers in Brazil.
The giant snake was moving into a field of farm animals looking for its sumptuous lunch.
Soldiers were called to help during the attempt to remove the huge reptile after it was viewed in Caccu, a rural town in South-Western Brazil.
Meanwhile, the local farmers were in a perplexed situation by the disappearance of their pigs and chickens.
But, when they viewed the huge anaconda, they had nothing to hesitate regarding the disappearance of the domestic animals.
According to farmers, the anaconda which they viewed in bushes, was large enough to eat a pig or even a child.
They said that a snake of this kind would easily finish them off as the huge reptiles eat by swallowing.
Keeping an eye on the huge 150 kg anaconda, the farmers waited until soldiers from a local military unit arrived.
Then, the soldiers and farmers together captured the snake by its head and tail and brought it to the road where a truck with a cage was arranged.
Then they bundled the anaconda into the cage kept at the back of the truck with utmost care.
It was certainly strong enough to cause significant damage to anyone who goes near it.
A military spokesman said that the attempt appeared them difficult as the snake was very strong which wriggled around a lot.
The beast was then taken to a remote lake where it was released.