A dog with two broken front legs surprises by her willpower 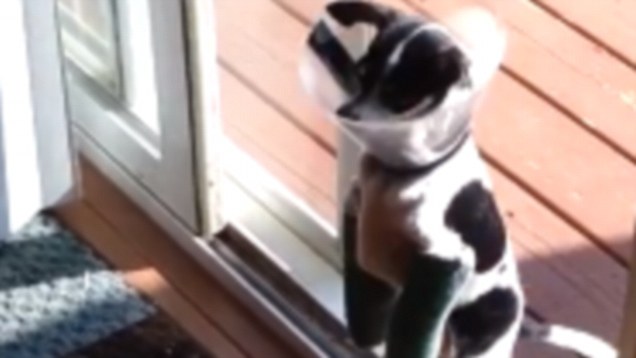 One female dog having broken legs is seen very stubborn and barking by moving here and there. Nothing can prevent her from moving around even though her two broken legs are in plaster.
During one occasion the determined dog is seen limping with her two front legs hanging from the sides of the body.
But she is not seen bothered by these deformities or by the cone around her neck while walking on her hind legs and hoping through a door.
It is impossible for any viewer not to smile as the dog with broken legs jumps off a six foot deck and bounds over the outset resembling a kangaroo.
The dog’s breed is unconfirmed, in-spite of her appearance as a Jack Russell.
According to one viewer it was funny to see the dog walking and hopping in a cool and clever manner.
With both of its front legs in plaster, the little dog is trying her best to bounce around using its hind legs.

Video of the dog with broken front legs