Alexander era statues found in a tomb discovered in Greece 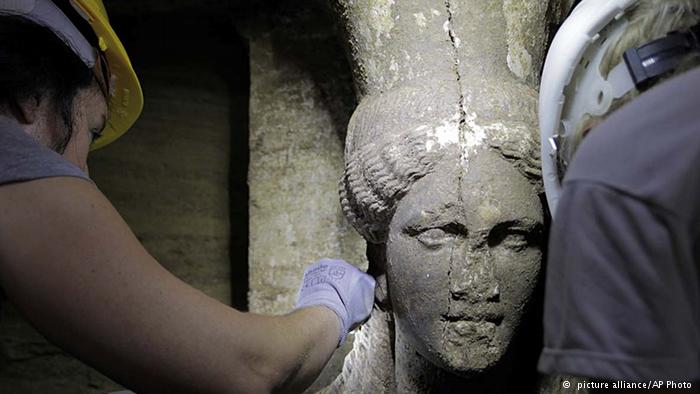 Greece: An enormous tomb in northern Greece, dated back to the time of Alexander the Great of Macedonia has been discovered recently.
Two stunning statues guarding the entrance of the of the ever biggest ancient tomb have been unearthed from the monumental site.
The two female statues in long-sleeved membranous cloth were found standing on guard at the opening to the mysterious Alexander The Great era tomb near Amphipolis in the Macedonia region of northern Greece.
Archaeologists said that the left arm of one and the right arm of the other are found raised in a symbolic gesture to indicate entry refusal to the tomb.
There is assumption that the mounting the tomb, which dates back to the reign of Alexander (356-323 BC), may be untouched, with its treasures intact.
Previous evacuations of Macedonian tombs had uncovered amazing treasure of gold jewelry and sculptures.