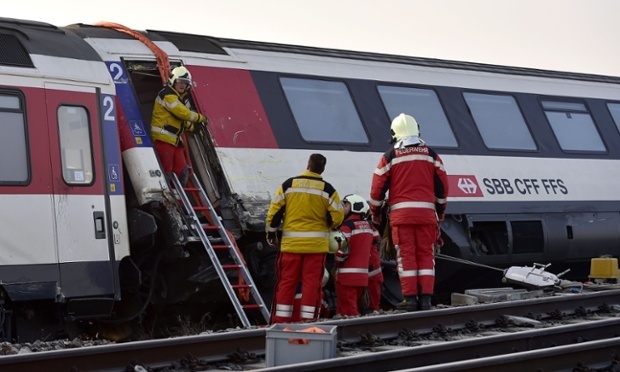 Zurich: Two trains are reported to have crashed each other at north of Zurich while dozens injured.
The accident which took place at the start of peak hours, leaving dozens of passengers injured while carriages fallen Topsy-Turvy.
A police spokeswoman said that there was a serious train accident that morning which left so many injured.
She was not interested to give any further details.
The unfortunate collision between an Intercity express and a local commuter train was at a station called Rafz.
This is a town that locates 19 miles north of Zurich.
Following the accident, one of the locomotives were badly damaged while several of the derailed carriages tipped on their sides.
Both the trains had been damaged fully.
Ambulances, fire and rescue services were rushed to the scene.
After the accident the train service between the towns of Bulach and Schaffhouse had been suspended.
A rescue worker, who refused to give his name, told the 20 Minutes daily that as many as 49 people had been injured in the crash.
Ambulances from all regions were mobilized to take the injured passengers to hospitals.
The Swiss are Europe’s top rail users, and their network is normally admired globally for its safety and quality.

Video on the train collision at Zurich in Switzerland