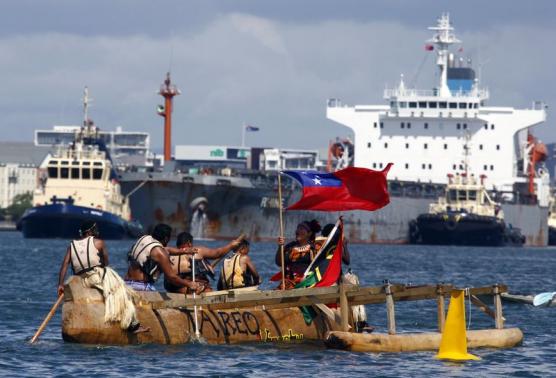 New South Wales: Hundreds of people are said to have created obstruction at the Newcastle coal port in New South Wales, Australia.
Their intention was to seal off the Australian port since 9 am.
Only four of the 12 ships, including two coal tenders which scheduled their departure from the port have broken the blockade.
The agitation was lead by a group of Pacific Climate Warriors from the 12 Pacific Island nations.
The blockade is said to have been continuing in spite of several encounters with police vessels which caused boats to overturn.
The 30 Climate Change Warriors have used traditional canoes built in their islands and brought to Australia, to stop coal ships from entering and leaving the port during their agitation.
They are protesting against Australia’s plans to double coal exports and increase gas production on a large scale which may deteriorate the existing climatic change in their Pacific homelands.
On the same day the protest was proposed, hundreds of Australians closed their account dealings with four big banks in Australia and decided to make a statement against their financing of fossil fuel expansion projects.
The climatic change will effect the Pacific Islands with increase of sea levels, floods and intense storms.

Video on the aftermath of climatic changes in Pacific Island nations