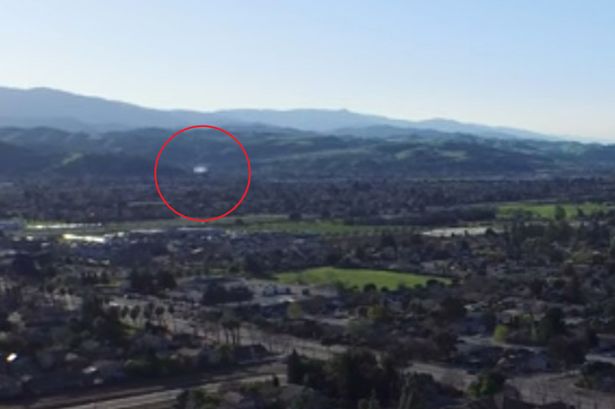 California: A mysterious unidentified flying object has been captured by a high resolution drone camera as it was moving through the air at an unbelievable speed.
The UFO was caught on drone camera by the DJI Inspire 1 and came to know about it while uploading one of the few 4K video clips on-line.
But even this ultra HD resolution drone camera couldn’t capture clear still images of the mysterious object as it was simply moving too fast.
After two seconds of the four second footage, the object could be seen shooting across the sky as a small white representation.
Cars traveling on the roads in the video give viewers some idea about the fastness of the flying object which was moving across the sky at an amazing speed.
Following the appearance of the UFO, theories related to it have started appearing on-line.
While some of the theories suggested the object as some kind of military weapon, others put forward certain less convincing ideas.
According to the latter opinion, the white blurred image could be that of a supersonic bird.
The drone pilot is seemed to be genuinely interested in figuring out what was captured on video.
According to the owner of the video the UFO might be a Hummingbird or a bug.
The average flight speed of these birds is 30mph which is a little bit slower than the estimated 1,800 mph of the UFO.
The clip, which was uploaded on You Tube by 1darmino, has already piled up a massive 145,423 views.

Video on the UFO captured by the drone camera