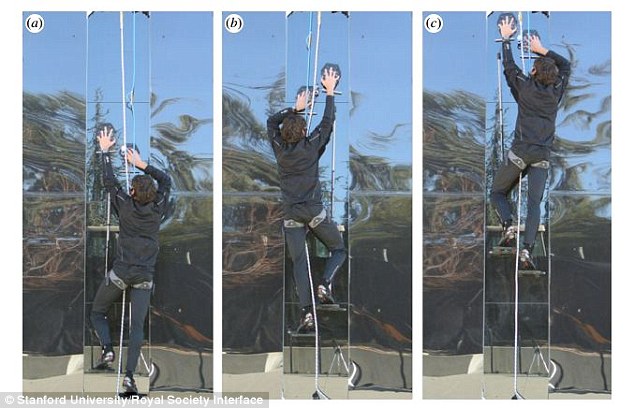 United States: In a dramatic experiment, a 11-stone volunteer has crawled up a 12 ft tall glass sheet using sticky attachments on his hands and feet.
The demonstration is capable to memorize the movie ‘Mission Impossible’ in which Tom Cruise clings to the outside of the world’s tallest building, the Burj Khalifa in Dubai.
But unlike the sucker-gloves employed by Cruise, the gecko devices are technologically sophisticated and genuine.
They employed the same natural molecular forces that allow gecko lizards to scamper around on ceilings.
Here the theoretical background is of Electrostatic Van Der Waals forces which cause neighboring molecules to be attracted to each other.
Although very weak, the effect is multiplied by thousands of tiny hairs that cover a gecko’s toes, allowing them to stick firmly to surfaces.
Adopting the same principle, scientists created tiny tiles called “micro wedges” to generate Van Der Waals forces and produced a dry adhesive even more efficient than the gecko’s.
Thus, human beings are now capable to to climb-up vertical glass sheets with the support of the scientific technology based on ‘Van Der Waals forces’.
The research was conducted in collaboration with the US Defense Advanced Research Projects Agency (Darpa), whose “Z-man” program is to investigate biologically-inspired climbing aids for soldiers.

Video on the climbing up of vertical glass sheets